AZULEJO AND OTHER CURIOSITIES

(Listen to the music while reading blog post. Big thanks for this week’s music recommendation for Barbara Abonyi-Keszte. Your destination is: Pontevedra, Spain)

Let me start by telling you that summer has finally come to Portugal. It’s 28 degrees, no clouds in the blue sky and we continuously get vitamin D. On the very first real summer weekend locals all went to the praias, some with a nice book, others with a nice partner or some cute dogs, if not, with a surf board.
There is a certain sex-appeal in the fact that your biggest problem in life is to find the optimal place on the beach where you can feel some breeze from the ocean, hear perfectly the murmuring of the waves, prop your book up properly and put your beer into the shade. The latter is particularly important to consider.
Another stress factor can be when after your evening bath you find half of the beach in your bathtub in a sandy form. Or you might be frustrated when the ocean hits you on the face playfully with a giant wave in case you don’t pay attention for a second. Life’s hard. (The agapanthus is now blooming in Fontanelas. On the last picture you can see the only rebel, my favourite. All its fellows are sitting along the other side of the parapet, but this one dared to differ.)

The ocean is fantastic, but as in the last posts (here and here) you got more than enough, I hereby promise not to show any pictures of the salty water in this blog entry. But will show you some Portuguese tilework which will be more interesting than it seems for first, I promise. When it was not 100% summer, on a cloudy day I walked a bit around Azenhas do Mar and Fontanelas, the two villages in between I live here in Portugal, to capture some examples of the azulejo, the famous Portuguese tilework for you.
If you already had the pleasure to visit Portugal, you must have noticed that these people are quite fond of ceramic tiles. They use it for decorating, not just as functional items as we do in our bathrooms in Hungary. Here this kind of tiles are used for outdoor decoration in churches, public facilities, railway stations (Porto!), but you can find them on a bench in the park or in fountains, as street signs or on the front of the houses as well. 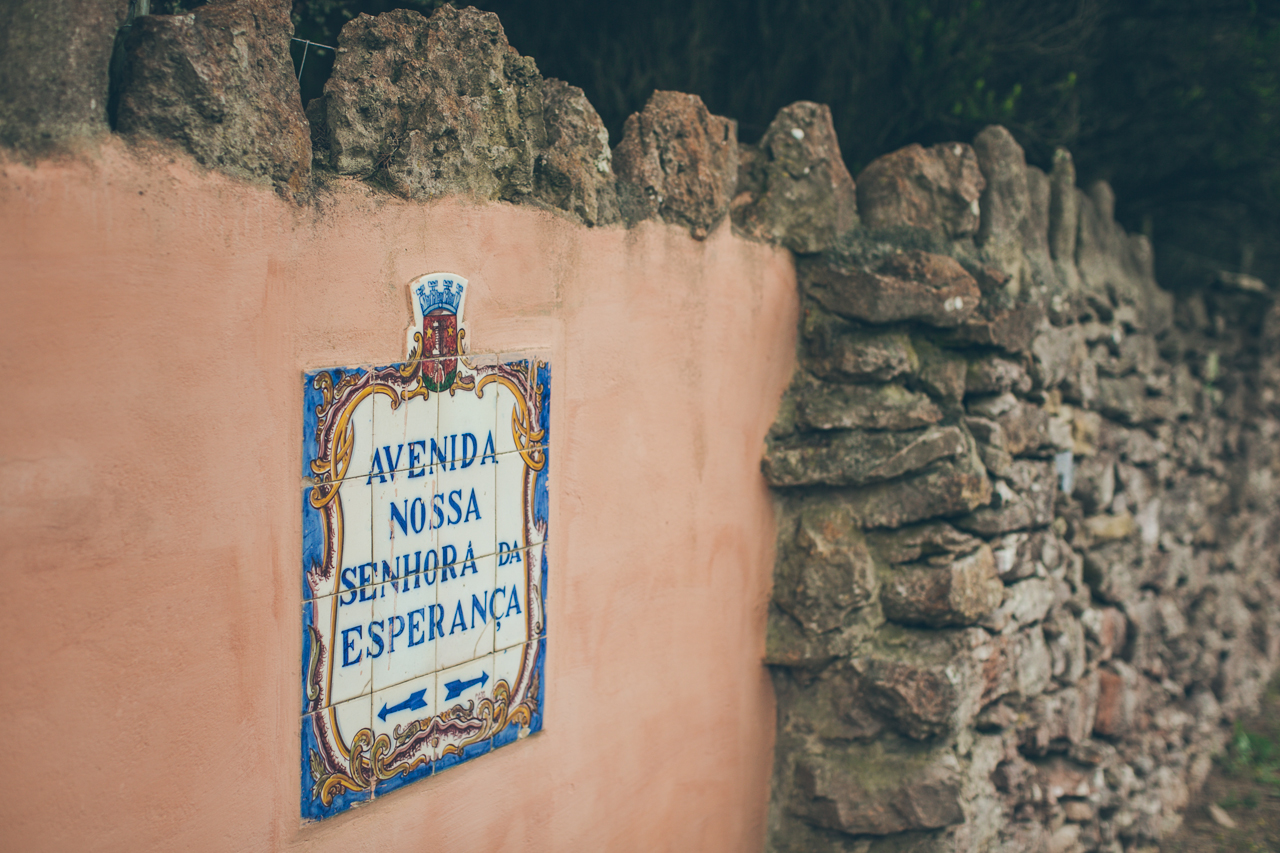 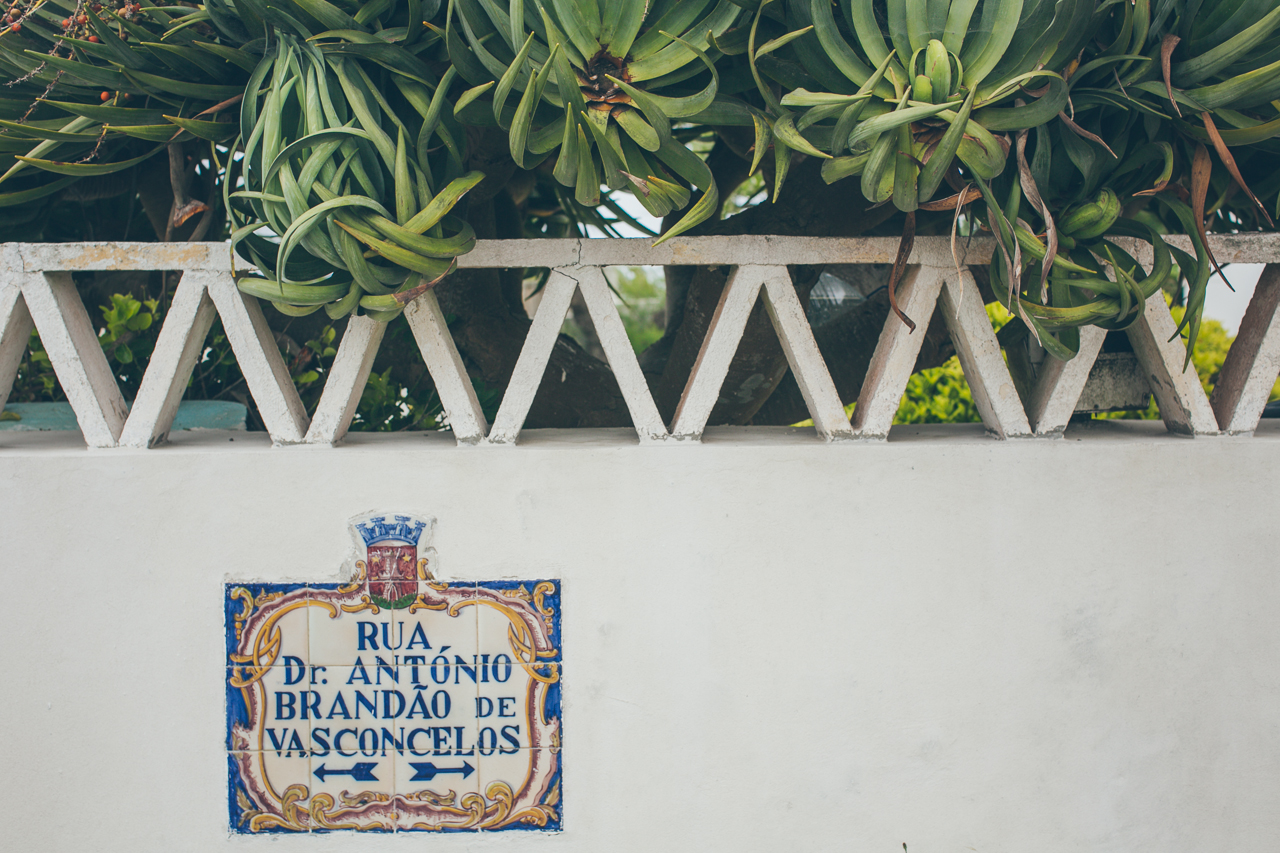 The term azulejo comes from the Arabic, meaning something like “polished stone.” It would be way to easy to say it’s originated from the Spanish word “azul” which means blue, as first the tileworks were blue. But in fact no. The Moors brought this term to the Iberian Peninsula, although no tile work from the time of the Moorish occupation survived in Portugal. 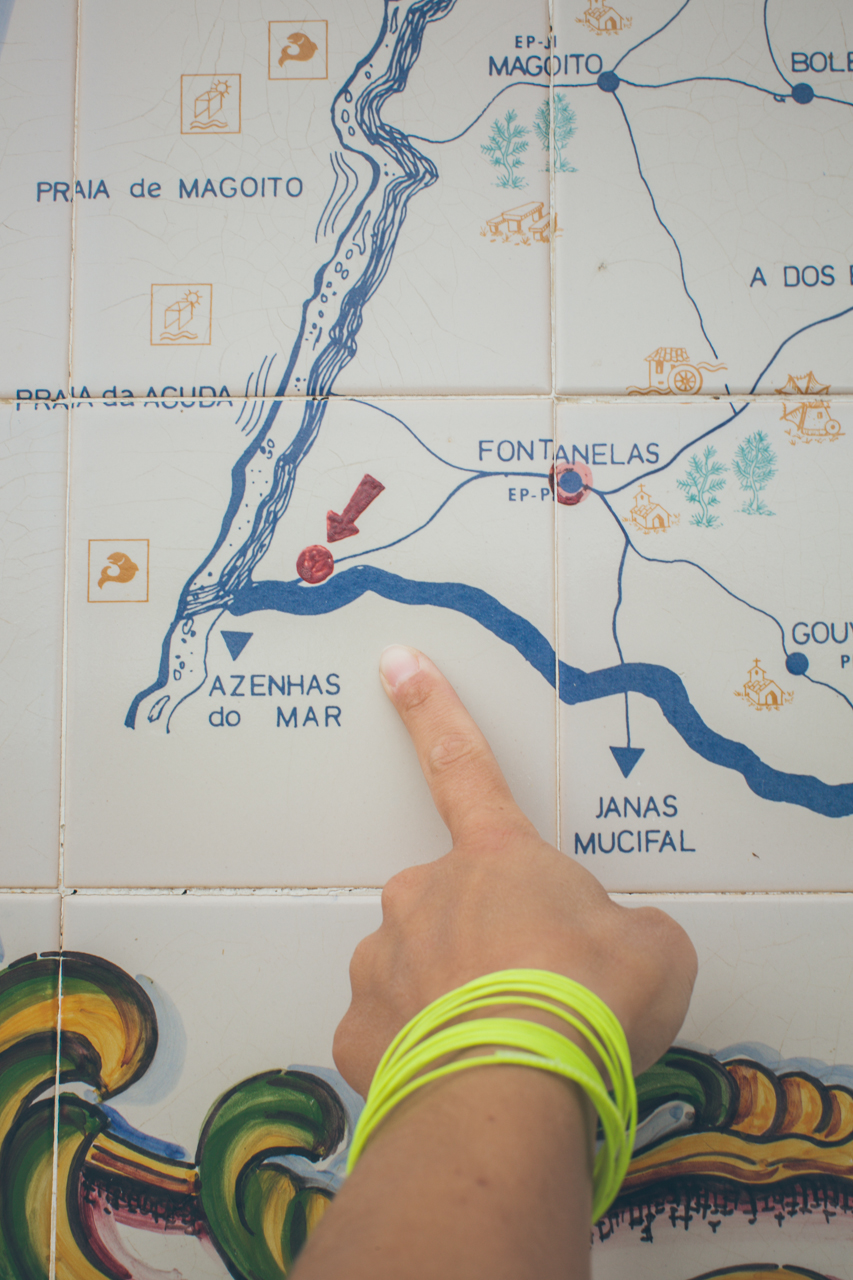 There was a Portuguese king who was so amazed by the Spanish Alhambra that he decided to decorate his palace in Sintra with the same type of tiles. First these ceramic arts didn’t contained human bodies according to the Islamic rules, only geometric shapes, but today of course there is a great variety of them.
As I wrote above, originally it was all blue and then the coloured versions were born as well – but if I can take a personal comment, I still like the blue ones the most. 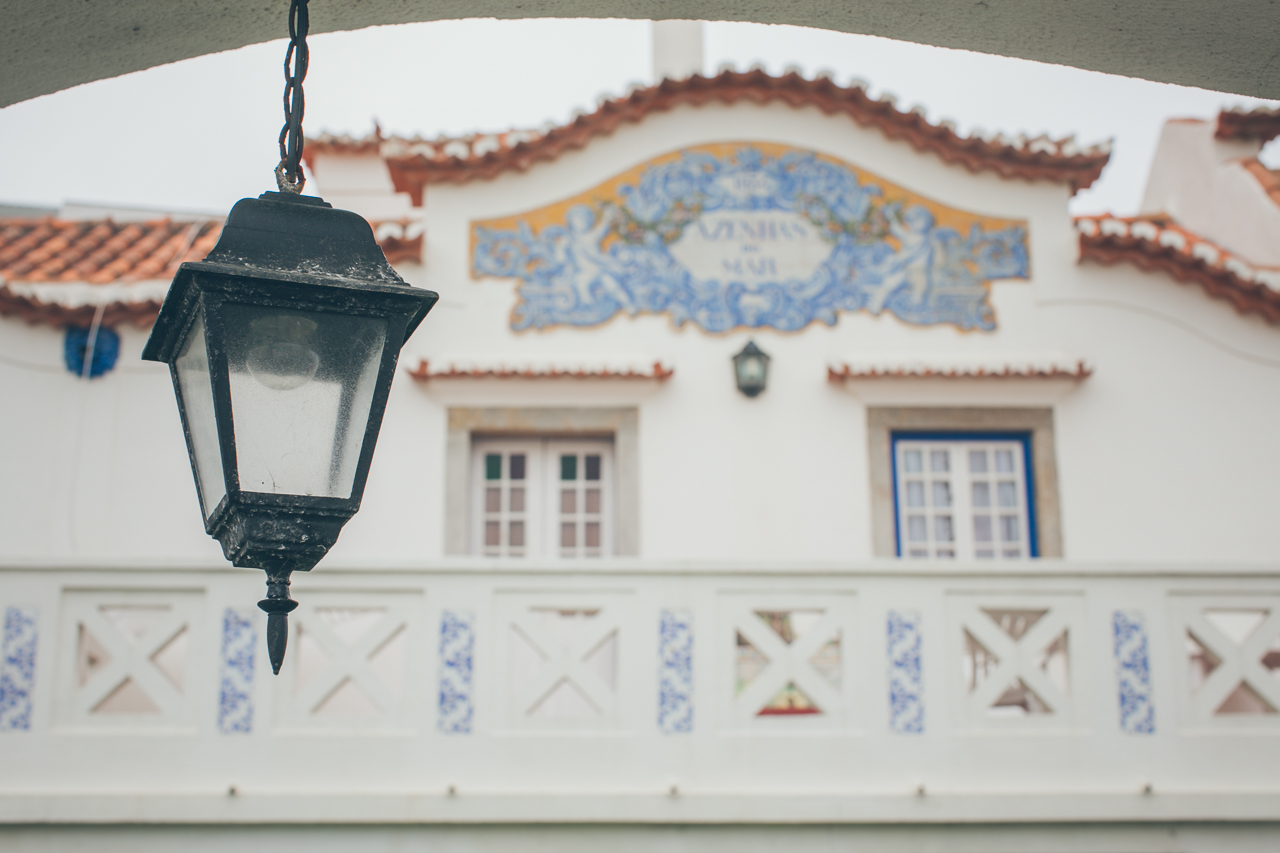 And if we are already in Azenhas do Mar and Fontanelas, let me show you some nice houses here. 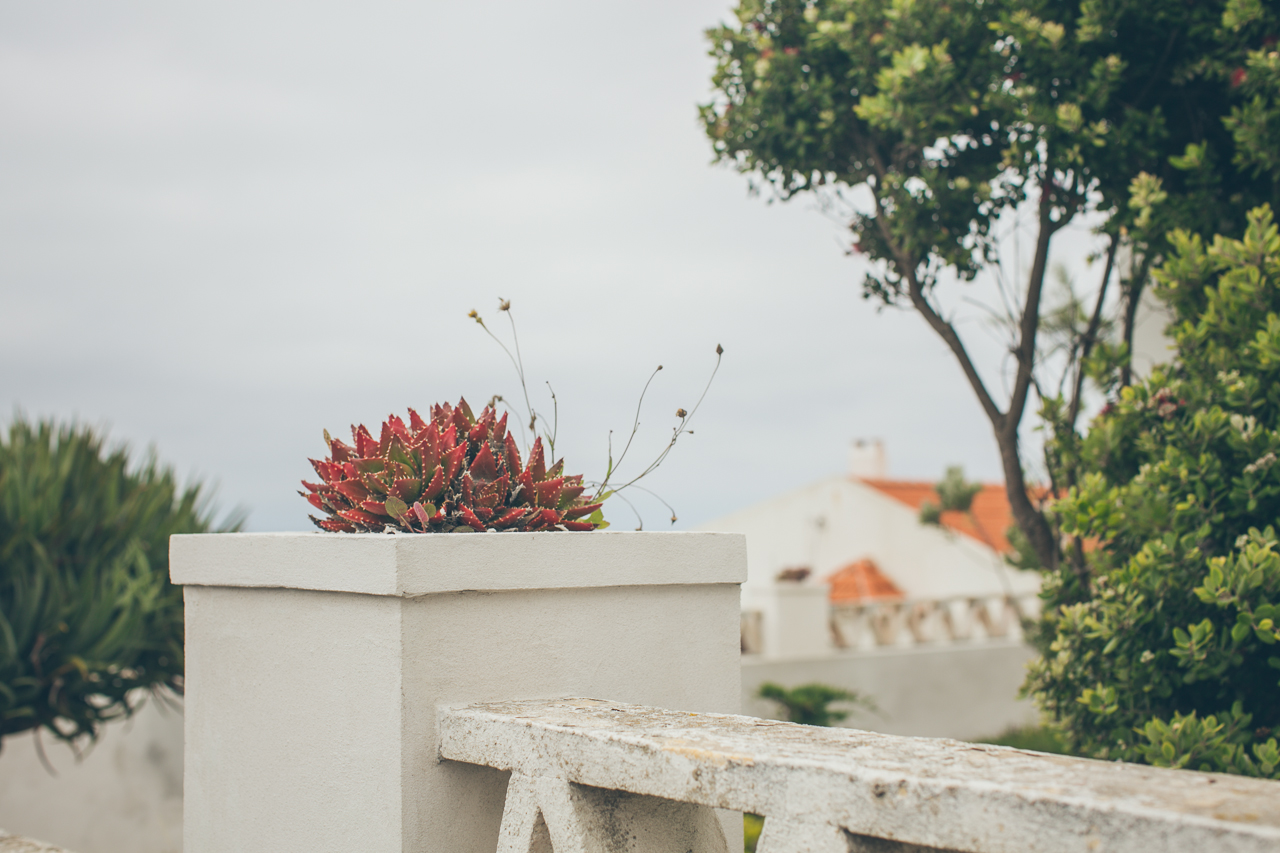 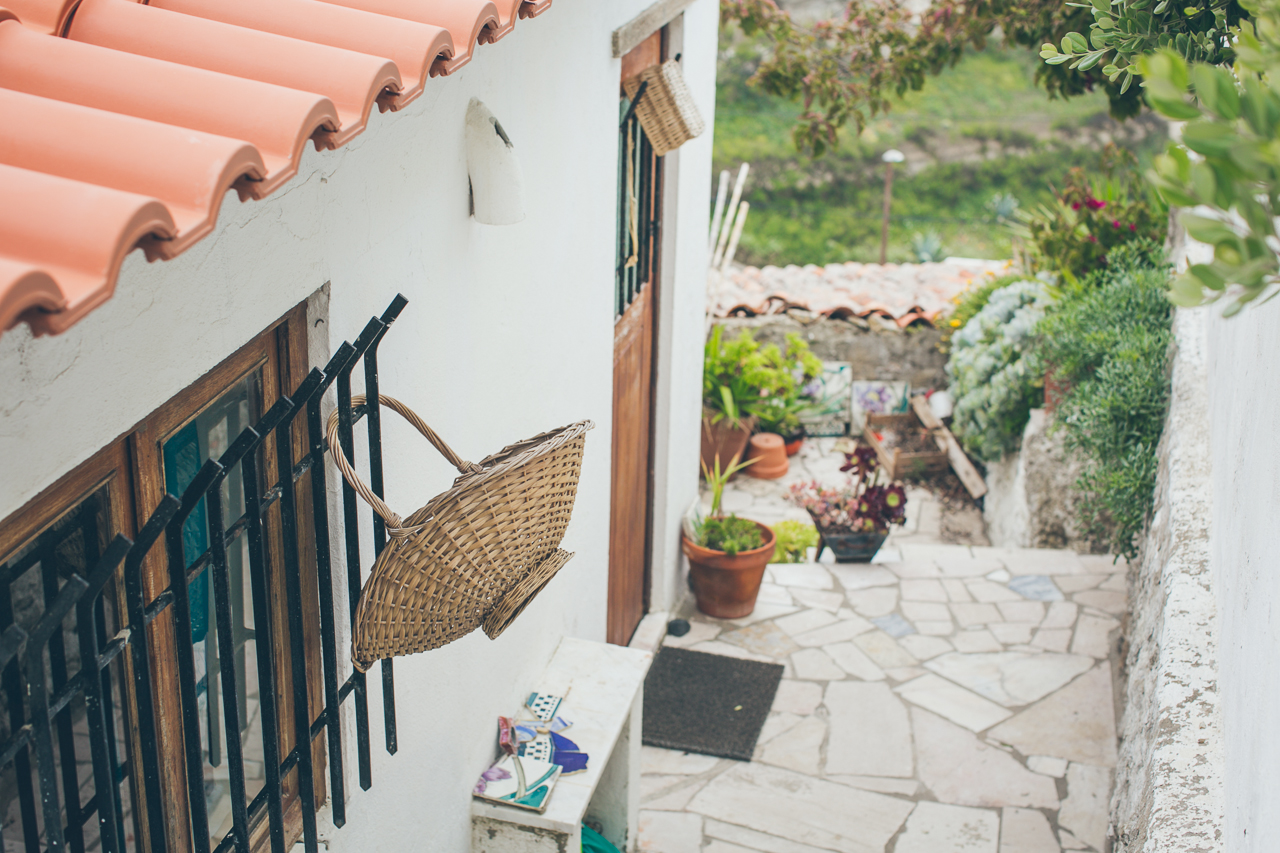 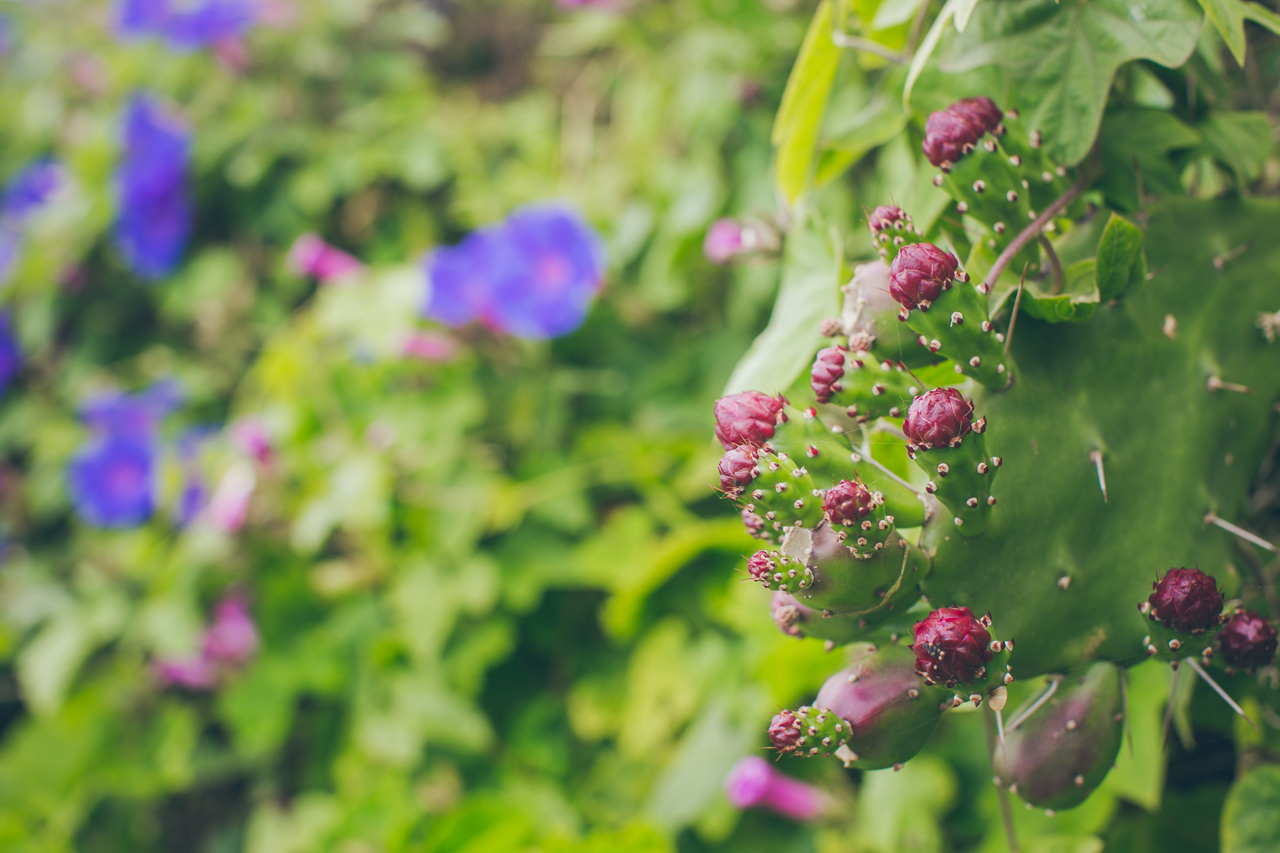 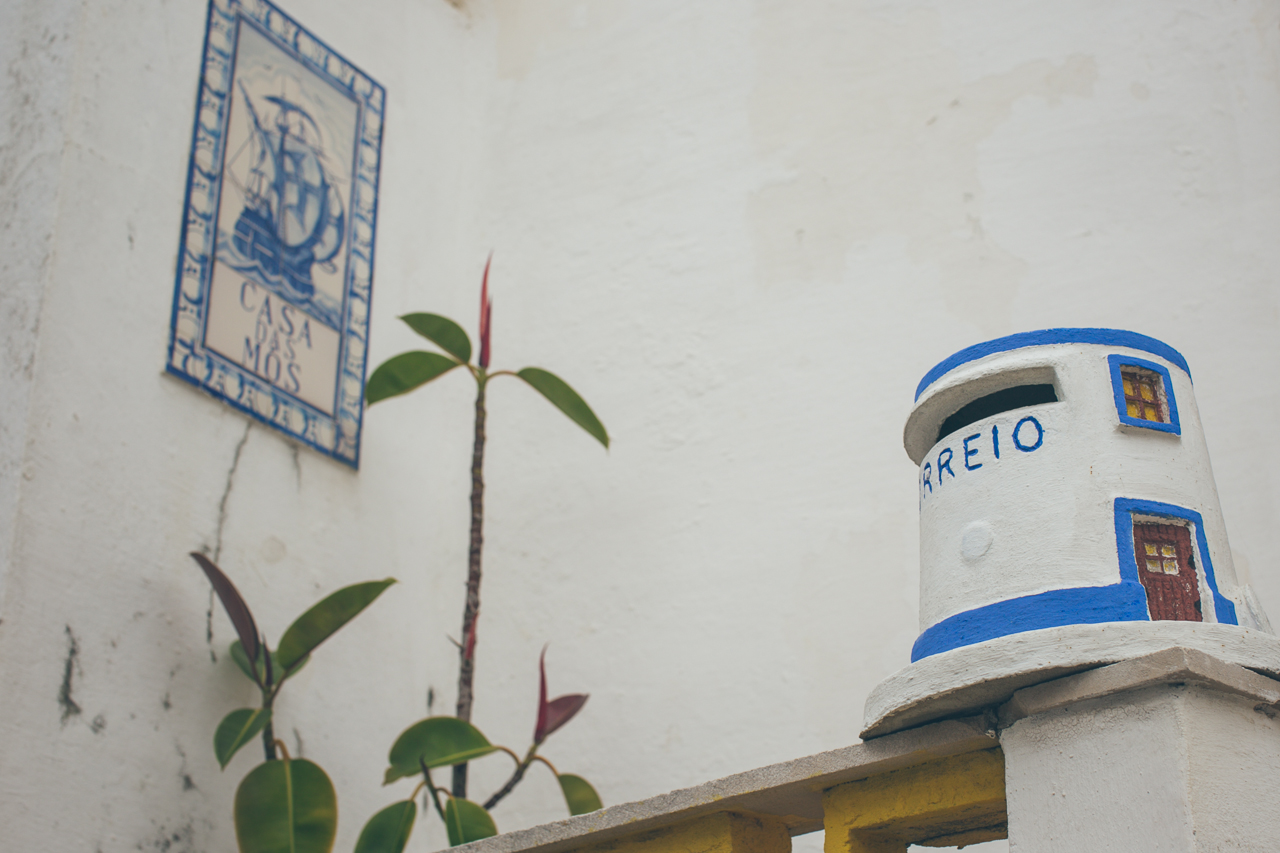 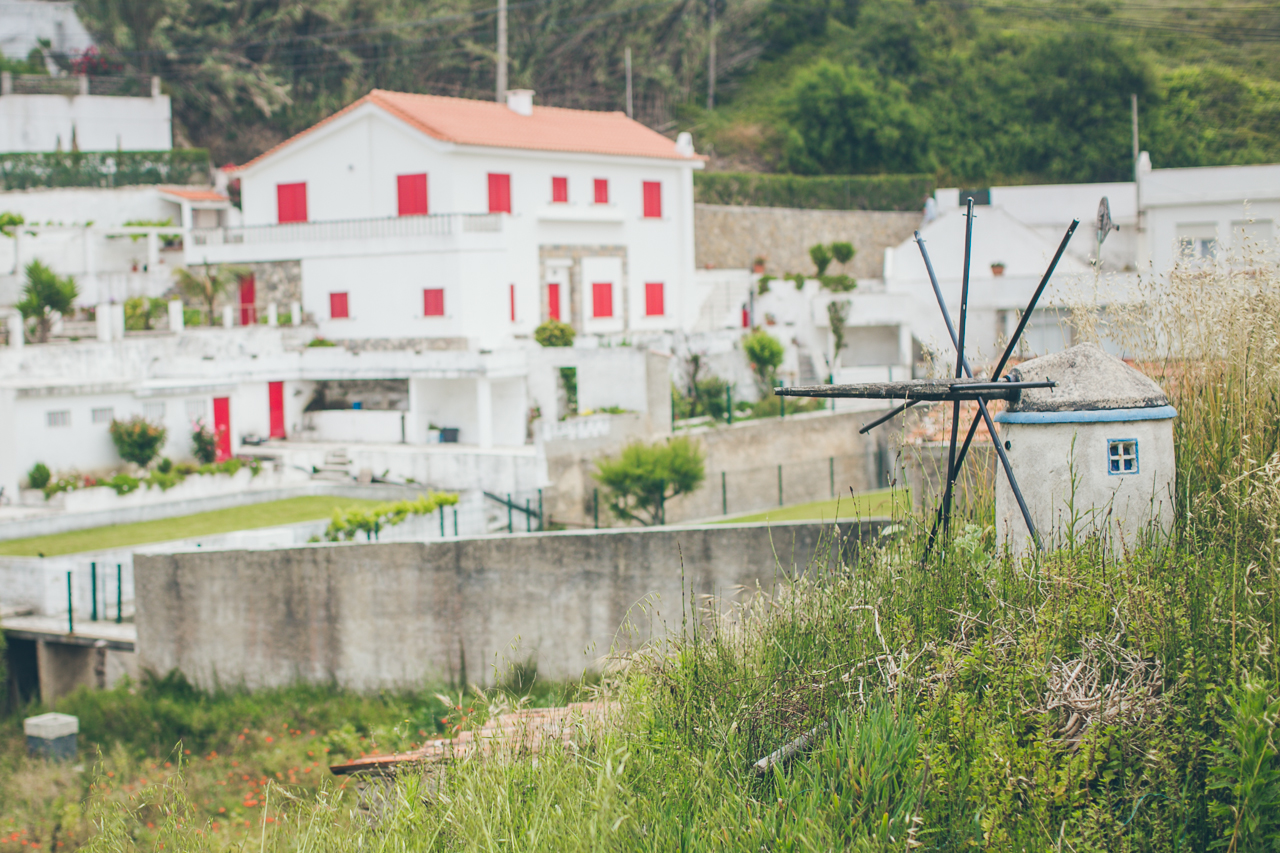 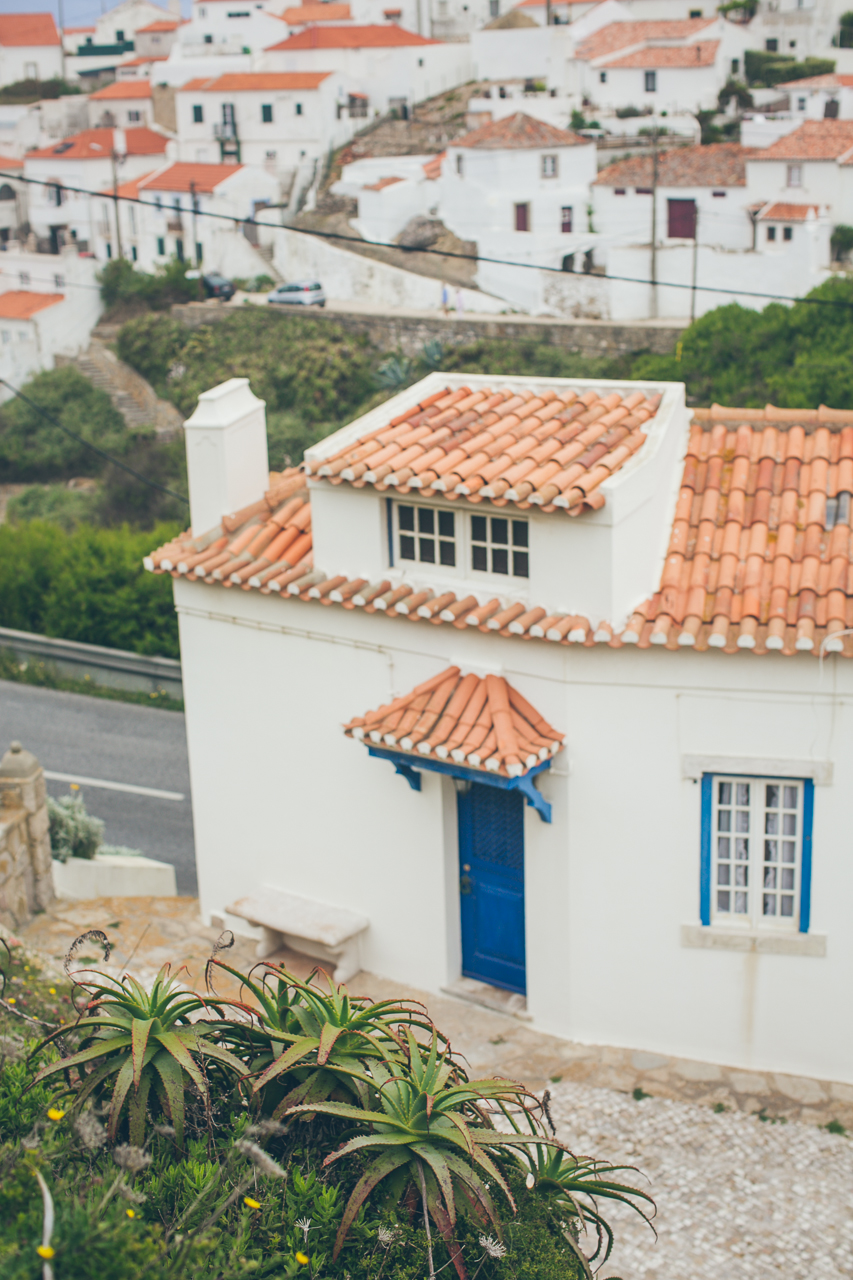 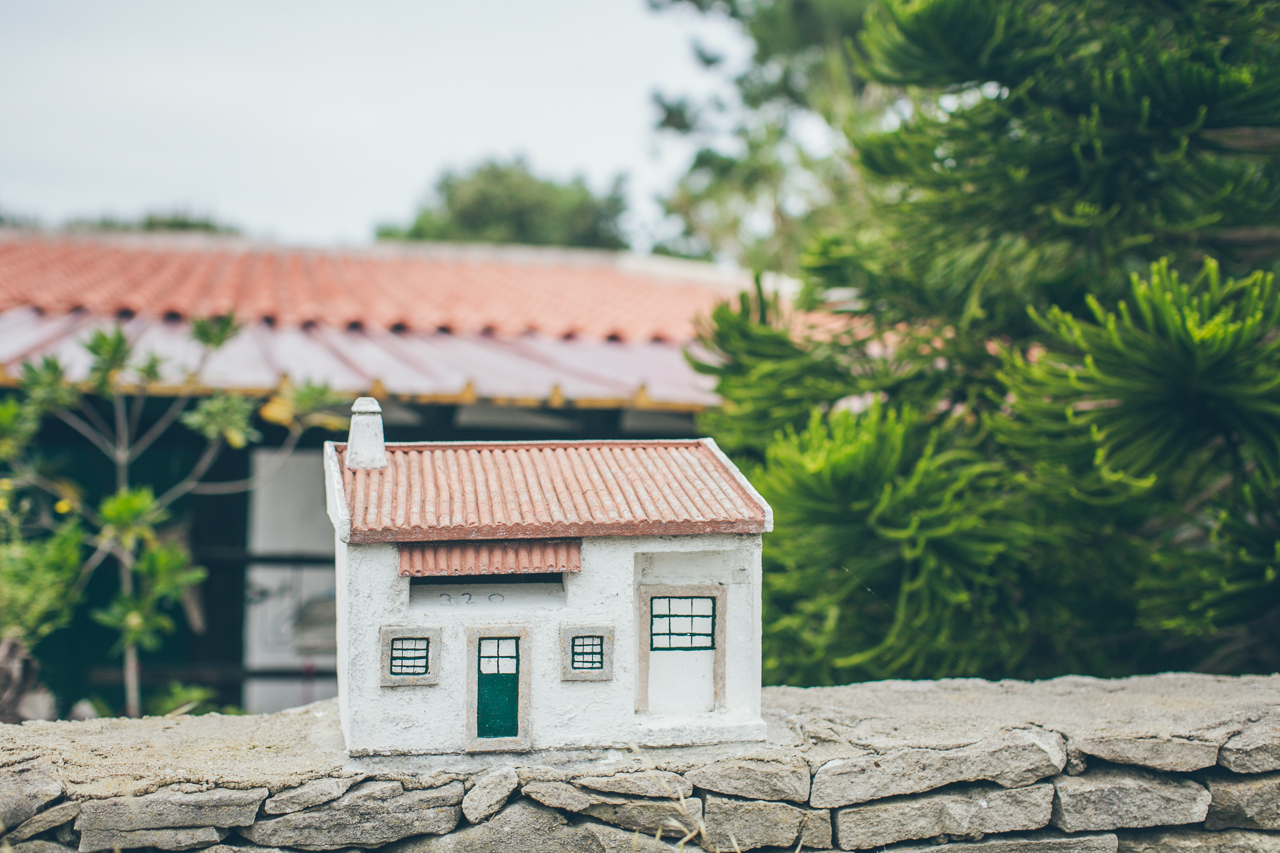 (This is a letter box that looks exactly like the house itself where it belongs. It feels better to get the final warning notice out of a thing like this, for sure.)

As a matter of fact, I have a house by the shore. It has attracted my attention for a while. The roof is painted in white colour, it has a tiny barbecue place in front and you can watch the sunset from the terrace. In case you see it from behind the lot of exotic plants in the garden. I don’t attach picture, not to make you jealous and have it before me. But if I attached, this would be it: And last but not least, the cutest thing. This is an ode to the nearby beach, on tiles of course. Oh… this picture of the salty water somehow managed to uploaded itself here, despite my promise… Who knows how? (And the text is something like this: ‘I like you very much and this will never change. You have a true charm, oh, beautiful Praia da Aguda!’ Only that is sounds much better in Portuguese.)