FRIENDS FROM THE AZORES

(As an exception, this time not only the music is important. When you watch this video, you’ll know why. It’s about the island of Faial and represents perfectly the life there. They are truly idiots, I love this band.)

Meeting with the locals. For me the most important factor when I travel to an unknown place is the human connection. This time, during my six weeks spent on the island of Faial I made amazing friendships. People of Faial are simply amazing. They live quality lives, no stress, no whining, no honking on the road and no scams for tourists. But they care for each other and especially for travellers. They give honestly, from the heart and don’t expect anything in return. They don’t assume any bad of others as they are nice people themselves. If you want to pay in a restaurant you have to cheat on them a bit and pay the bill secretly using some tricks, otherwise it’s impossible, they won’t let you do it. If you happen to end up in somebody’s private garden ‘cause you got lost on your way and the dog’s barking at you, the owner doesn’t ask what the heck are you doing in their place, but offer you some chocolate instead. In the bar if you are willing to chat a bit with the bartender, he’ll measure your whiskey, following the standard procedure and then pour the same amount for free.
During my weeks I made some nice friendships so let me tell a bit about them right now. 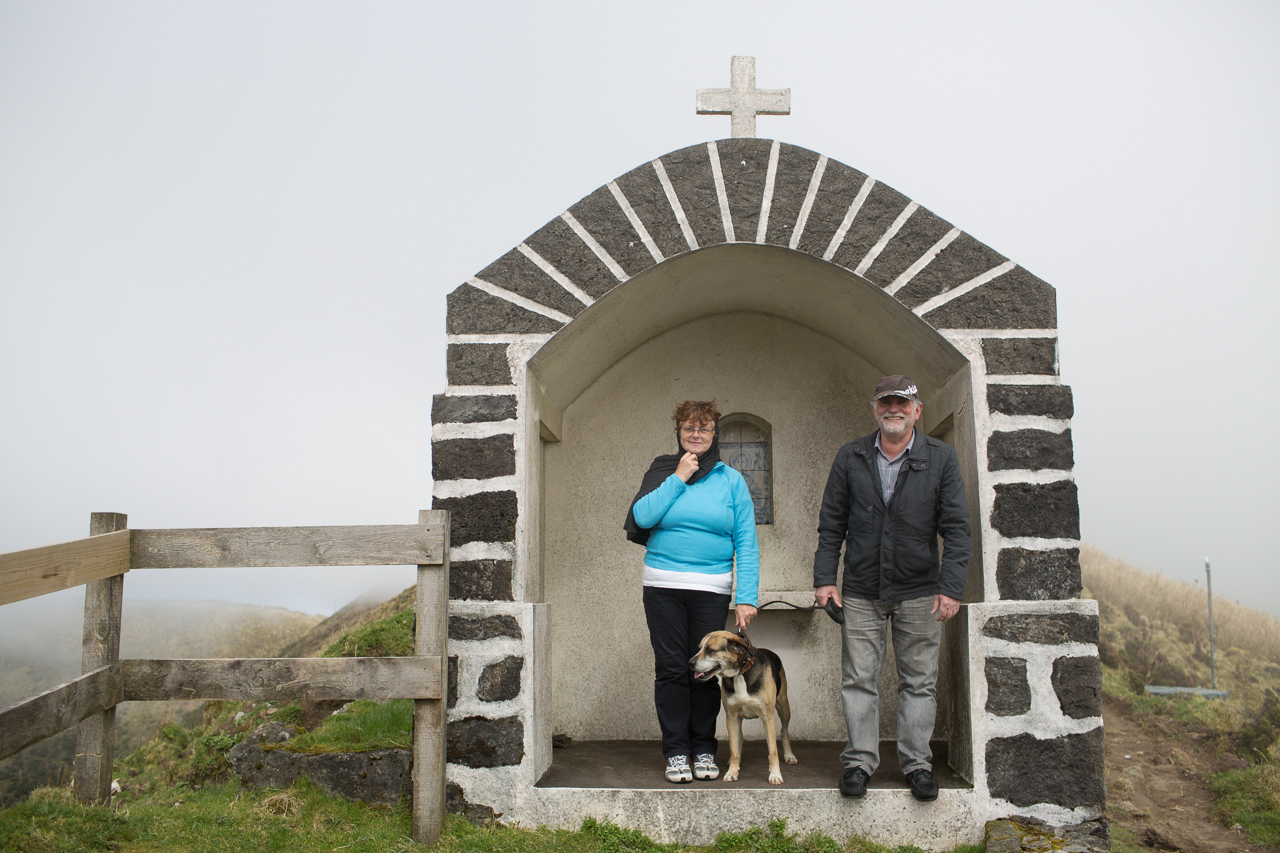 She is one of the most charming ladies on the island, she is my host, I was volunteering for her. She was for me like a stepmother or so. She is absolutely caring, she cooks octopus for Easter, because she knows this is my favourite dish, even if octopus is probably the most traditional Easter dish in the Azores. When I return back from the neighboring island late in the evening, she gives me a lift from the harbor, knowing I must be tired after climbing the volcano. Every single morning she asks with a smile whether I slept well and she is really waiting for an answer. Small things in life make her happy and she is keen on sharing happiness with others. Her spoken English gives us a couple of fun moments, but my Portuguese must give us even more. According to her own words, she tends to be tired soon. This is to be understood, after waking up, cleaning some rooms in the guesthouse, cooking the lunch, taking her daughter from school, doing the shopping, walking the dog, harvesting fruits, squeezing some orange for afternoon juice, organizing the garden and giving food for the cats. And she is mumbling discontentedly that she is not that young anymore. She takes me to the airport, when it’s time to go and bursts out in tears that I leave. I miss her. 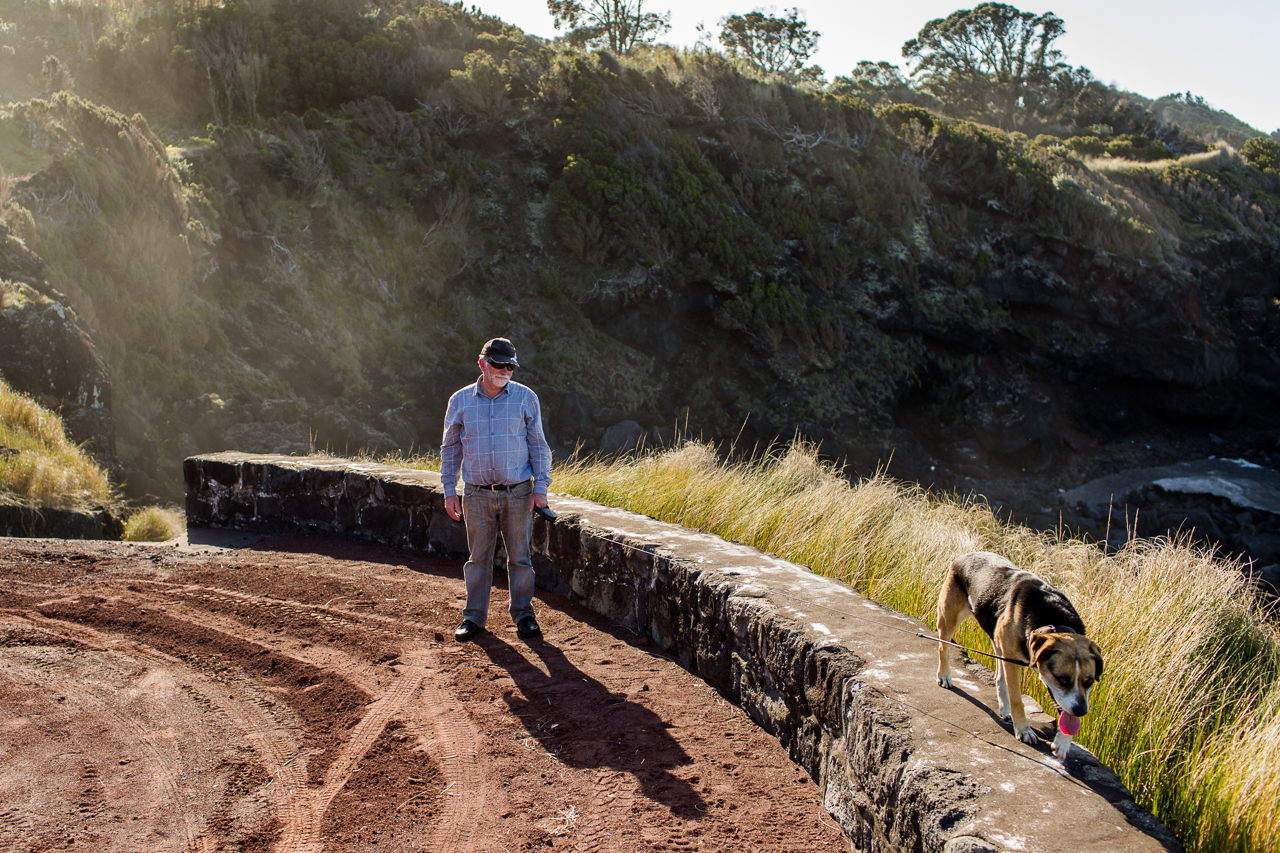 He’s Salomé’s husband, also my host. With him our most memorable moments are connected with the lack of common language. First we communicated only with gestures then I started to understand his Portuguese bit by bit (certainly when he spoke very slowly and loud, repeating the same sentence fifty times). When we first had a short conversation almost without huge misunderstanding, we both were extremely happy. He also have a big heart. When I clean the windows in the beautiful sunshine trying to use my phone to listen to music, noticing my pathetic attempt, he repairs his old radio and watches me smile. He get a coffee maker no matter what, as soon as he realizes that nescafé is not made for me. He asks me to come to the window just to show me that Pico mountain is covered with snow by the morning. He makes me sit in his car and drives me around the city to find the best spot for photographing the full moon. And neither of us cares about not understanding each other’s language, because we happen to understand each other perfectly. 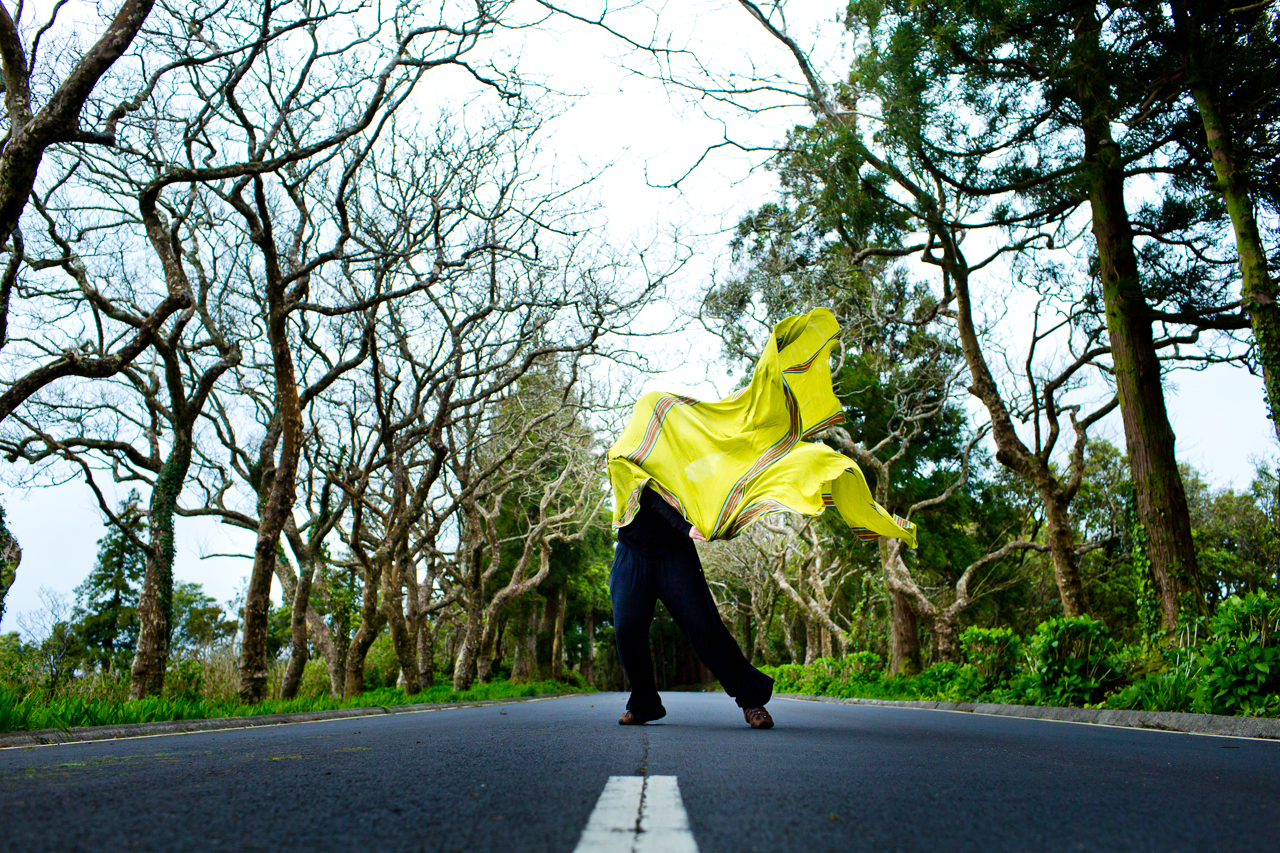 ‘Sónia, look, do you have any ideas where to go out on Saturday? I have my birthday then but don’t know about the local places.’
‘WTF?! Are you kidding? I have my birthday on the very same day!’
‘No waaaay….!’
Same year, same month, same day. Maybe this is why we became good friends. Or maybe because when she invites me for a traditional Azorean lunch she tells me that morcela is in fact a bloody sausage before I get a bite, not just after. Maybe because for her the similarly pronounced ‘church’ and ‘search’ don’t make any difference, or maybe because she can speak to the goats fluently. Maybe because being in Budapest once, she got confused seeing the same signs all the time “Bejárat” and “Kijárat” (entrance and exit) and wondered how it’s possible to end up constantly at the same place. Maybe because she is always up for a little laughing, maybe because she say yes without even thinking about it, when I have some silly ideas like hiking a volcano in complete fog or swimming naked in the ice cold ocean. Maybe because she is not afraid to be honest. Maybe because she cooks stuffed eggplant for dinner and never judge anybody for anything. Or maybe simply because she is a wonderful person with wonderful dreams and full of love. 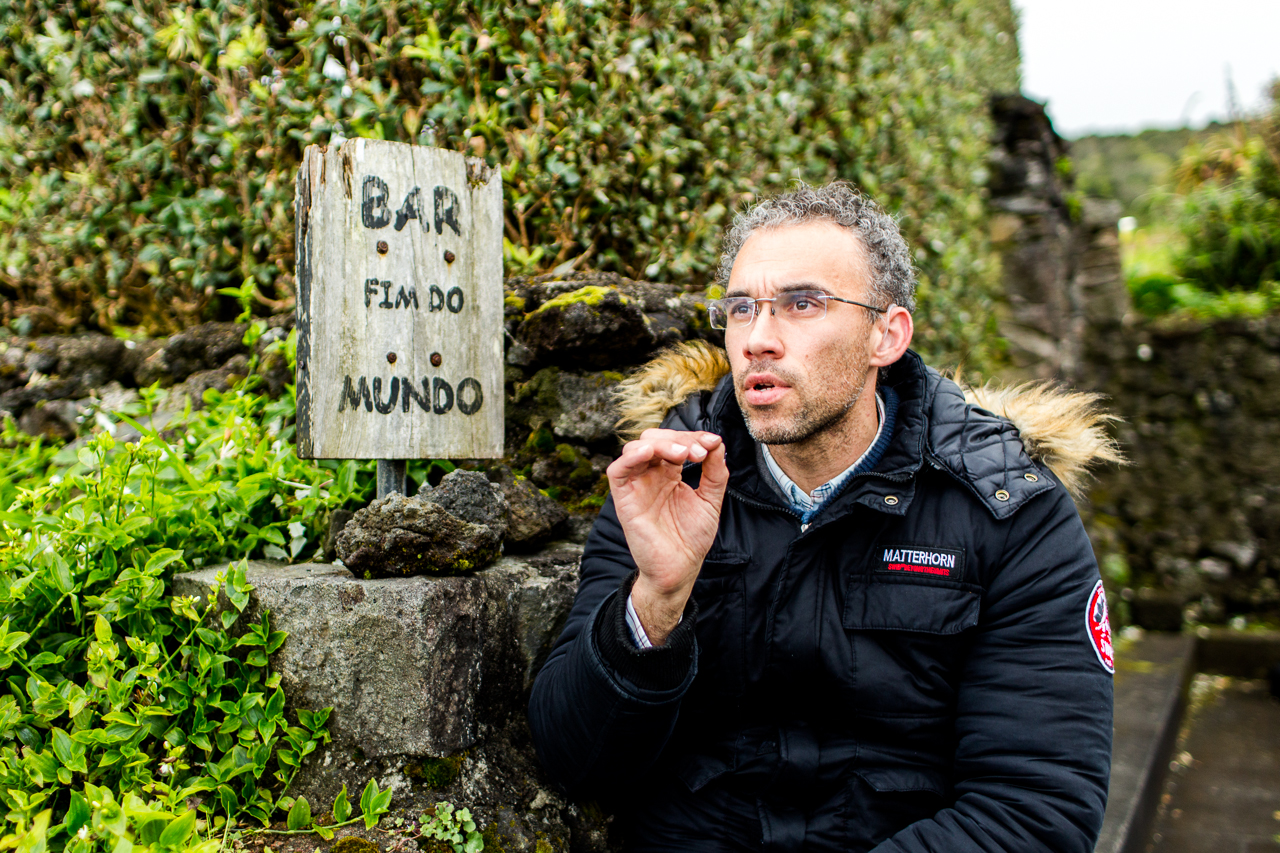 This guy just gave me a present: another definition of freedom, my most beloved word. We had a conversation and it turned out that he does diving. This still isn’t a big deal, everybody does diving in Faial as the underwater world is said to be wonderful. But he goes under alone. And without scuba. He just gets a deep breath and goes under to peek little fishes. Well, yes, I also do it every time when bored at home (not, of course). And on the top of it he has a big heart and excellent whiskey and these two facts makes people feel like being in his company. 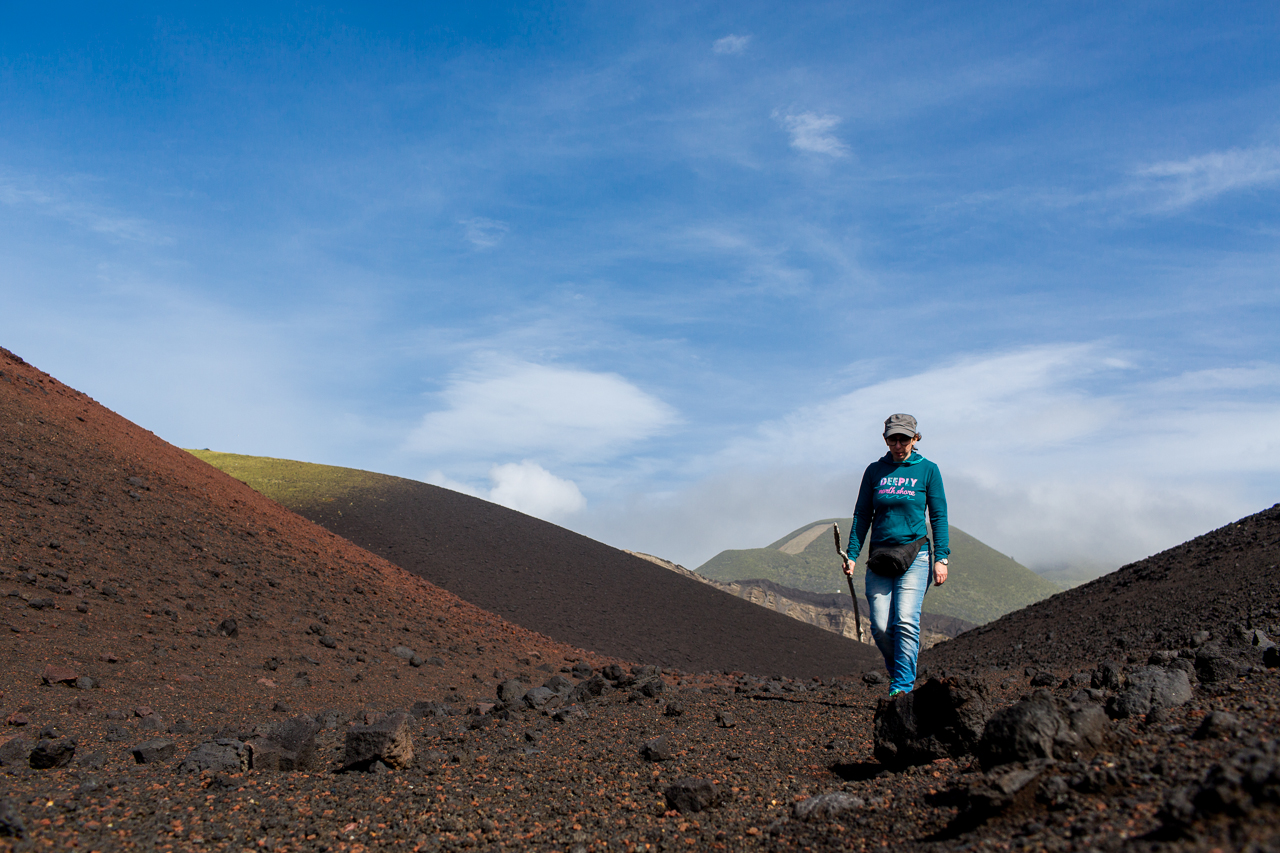 The first thing I got to know about Geni was that she was a volunteer firefighter and she started to attract me at this very moment, no matter how hard she tried to make this thing less important in my eyes. After a while it also turned out that she liked photography much and that fire and pictures are a great combination. Can you imagine the scene when in the middle of the forest (yes, surrounded by dry trees everywhere) Geni gets some alcohol, a lighter and set fire on Sónia’s hands? I have to admit, I only dared to watch this from a decent distance, even if it was relaxing to know that Geni can fight with every kind of fire. That was when I fell in love with the craziness of these two and from this time on we spent plenty of time together. (The fire-handed picture is amazing and the forest didn’t catch fire. Everybody’s safe.) 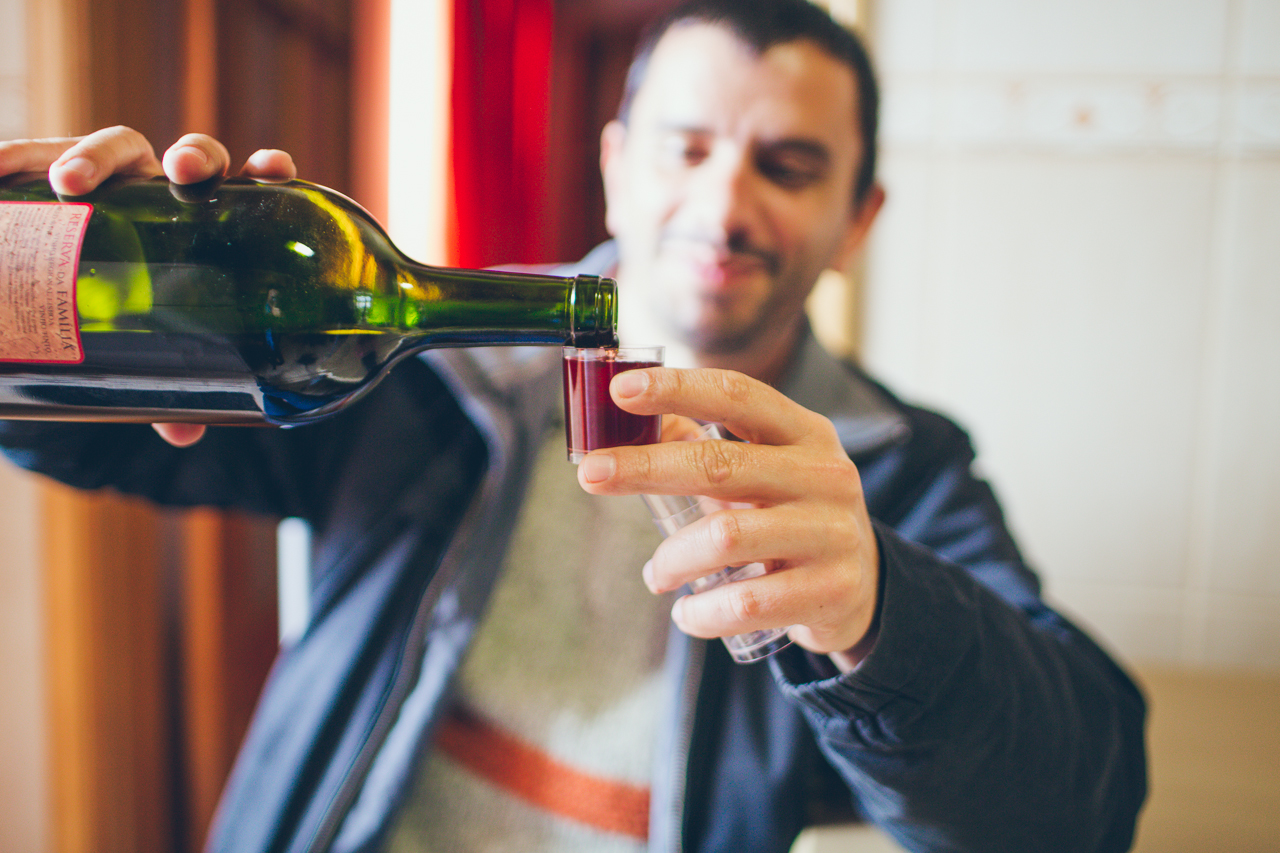 Apart from my male friends (which are not many) perhaps Emanuel is the only man with whom I’ve ever had conversations about life, the universe and everything (e.g. deep conversations over nothing). I like it much when I have the chance to understand our world from a male point of view. As he sees, everything is pretty easy, not being boring at all. He rides a bike quite often and always in breathtaking surroundings. He is not hiding his favourite cake as a secret (OMG, that cinnamon snail….! I’ll have a Pavlovian reflex at once if I just think about it) and not only he reveals the secret, but willing to share as well. He looks at me and knows that he should order a ‘drunken pear’ dessert for a perfect end of a perfect dinner. He has a great humour and he is extremely talented in pronouncing difficult Hungarian cursing. 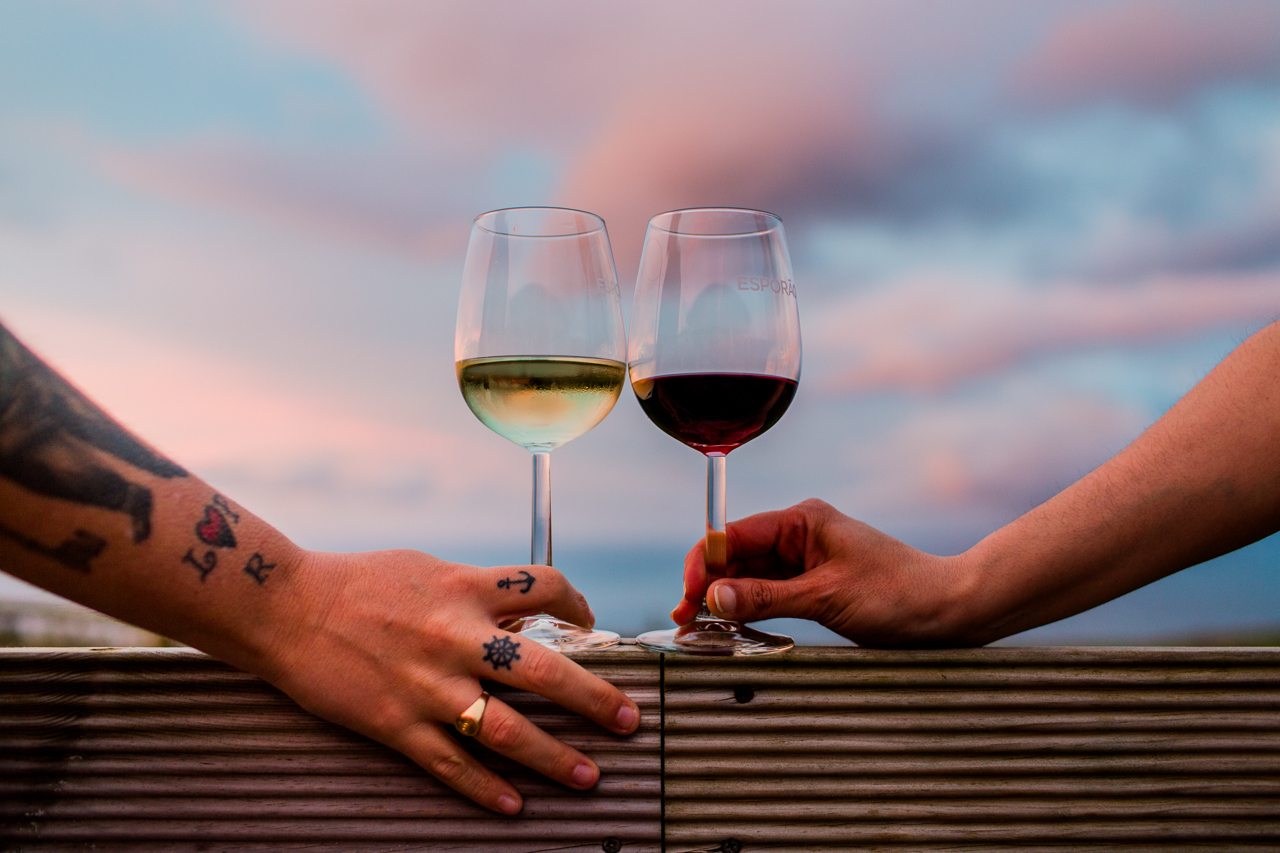 She is a photographer and a famous DJ in Lisbon. Her skin is a fine exhibition of perfect tattoos. She is honest, direct and straightforward without compromises, and this is what I like in her the best. One always knows how are things with her, she tells if something is shit, if something is good. Life’s easy. I met her in a difficult situation, in spite of that we always laughed. Bar ‘Fim do Mundo’ became our favourite place on Faial (this is the bar in the video clip, the meaning of its name is End of the World), where we had a blast while goats gave us some questioning looks. She has an interesting project of photographing famous people in their sleep. This was quite inspiring for me.

Guys, thank you all, I simply loved being with you and hope we’ll see each other again somewhere in our beautiful world. Or maybe at the End of the World.