Soup of the holy spirit

I’d bet in a big amount that you don’t taste very often the soup of the holy spirit. Well, neither do I. But in the big-fat-easter-fuss I had a chance to try it.
I am not religious (I have my own eccentric ideas of our world) and I get close to churches only when I photograph weddings in them. But in the Azores, where my new friends invite me for a nice Sunday holy spirit soup, I can not say no. Nothing is better than a good holy spirit soup. In my family we often eat holy spirit. Naturally. 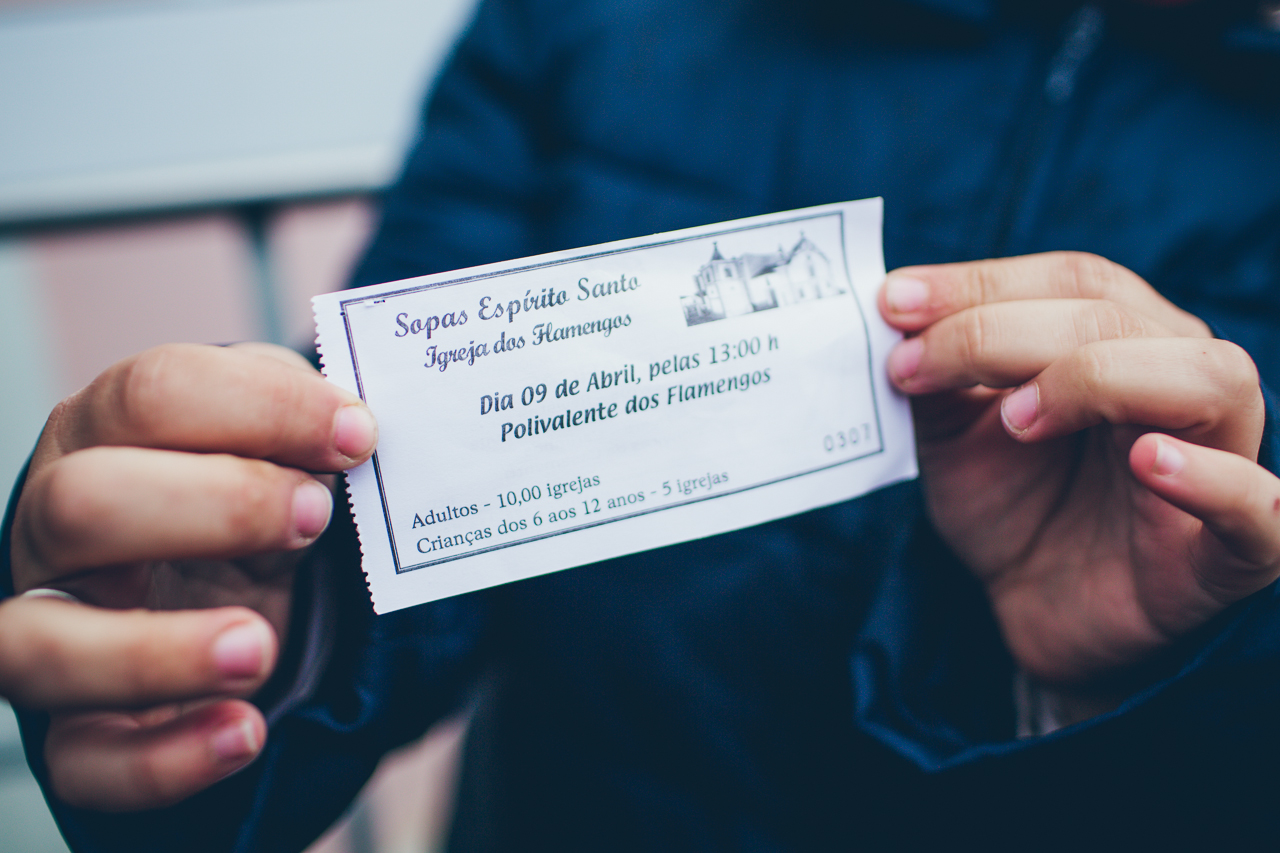 WTF?! Soup of the holy spirit?! At first I burst into a polite laughter but seeing Sónia’s serious face, I change strategy and ask what the hell is this all about. You need to know that in the Azores people has a different connection with the holy spirit, he is a figure with human characteristics, often projected as a male with silver crown and wings. The holy spirit soup lunch is dated from the 1300s where queen Izabela had been fed up with that her people are starving and started to pray to this winged-crowned guy for help. Next day two ships came full of different kind of food, with no people on them, so everybody was convinced they were sent by the holy spirit. So the people made a big feast, were extremely happy eating a lot of meat and bread (and I guess, drinking a lot of wine) and this had been the motive for this pre-easter custom when the poor are fed with the holy spirit soup. 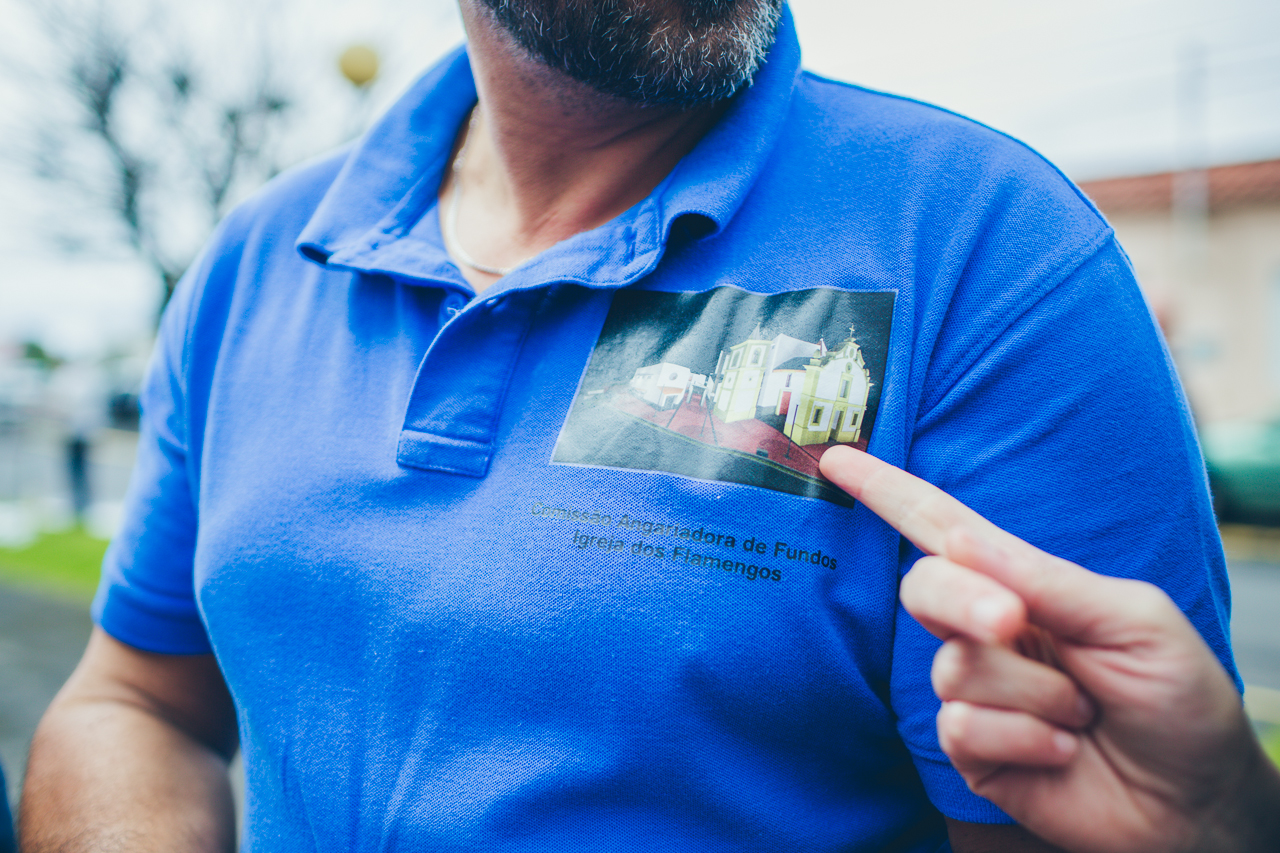 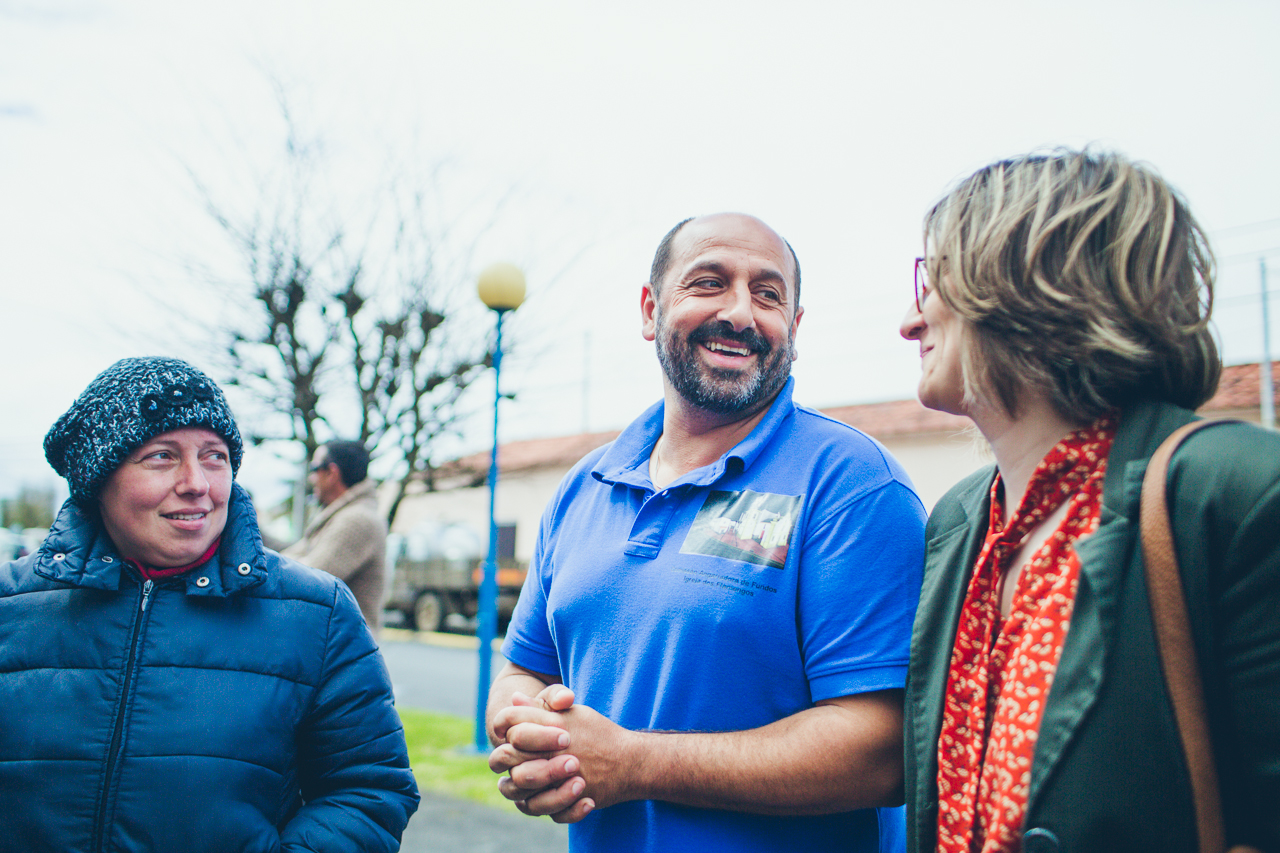 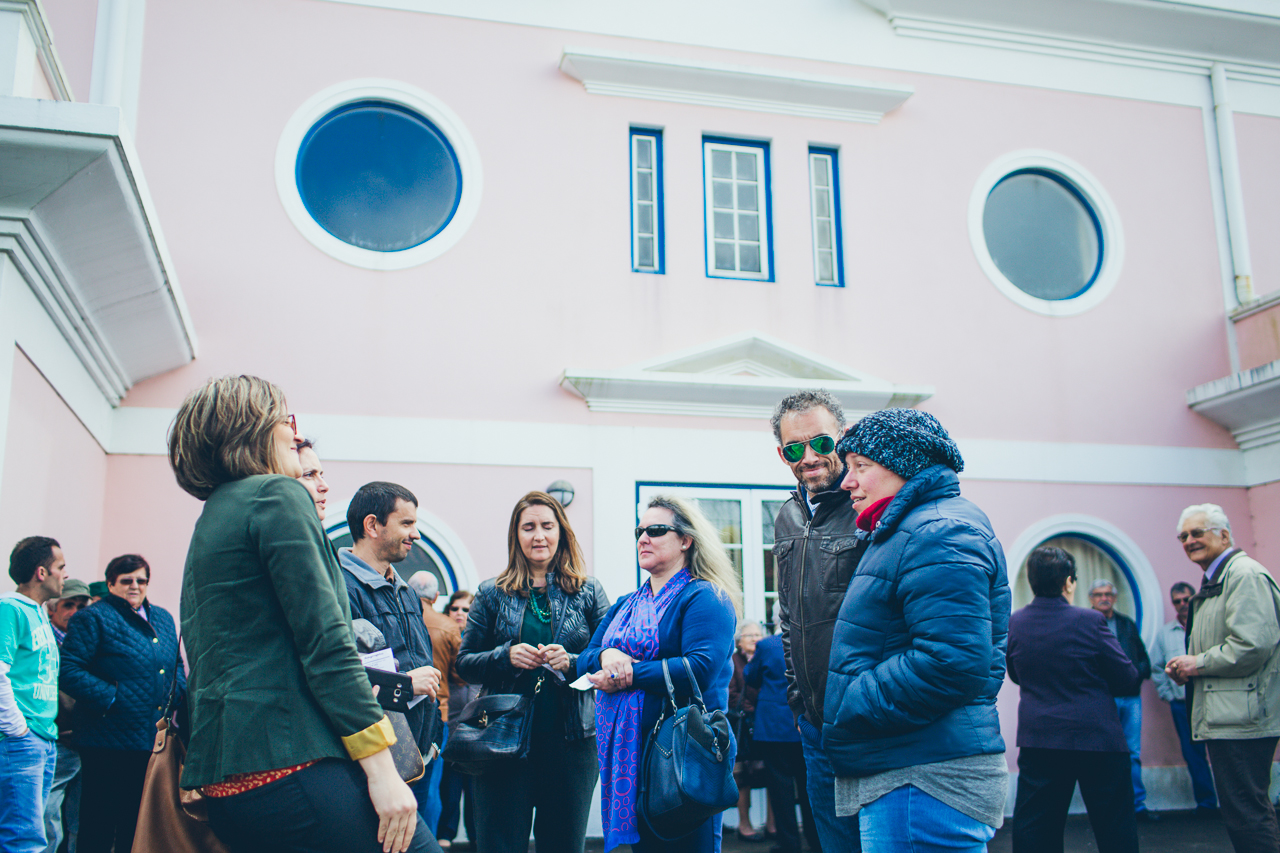 Here in Flamengos on the island of Faial this tradition is modified a bit, the people tend to buy tickets to the Sunday lunch and the local church is supported by the money. Those who can not stay might take the food away and eat it at home with their families.
People are coming and coming, we are standing in front of the place waiting for the gates to open and I have the chance that not many have: to get into the secret chamber of the kitchen! Of course, with my camera. Amazing scene there, huge pots and giant spoons everywhere, an incredible amount of beef meat and soup, truckloads of bread and many more. The stuff are busy and I suddenly understand how hard their work is, behind the scenes, to make us satisfied with the soup. I take some shots and my inner child is whooping that I made it to the secret kitchen. 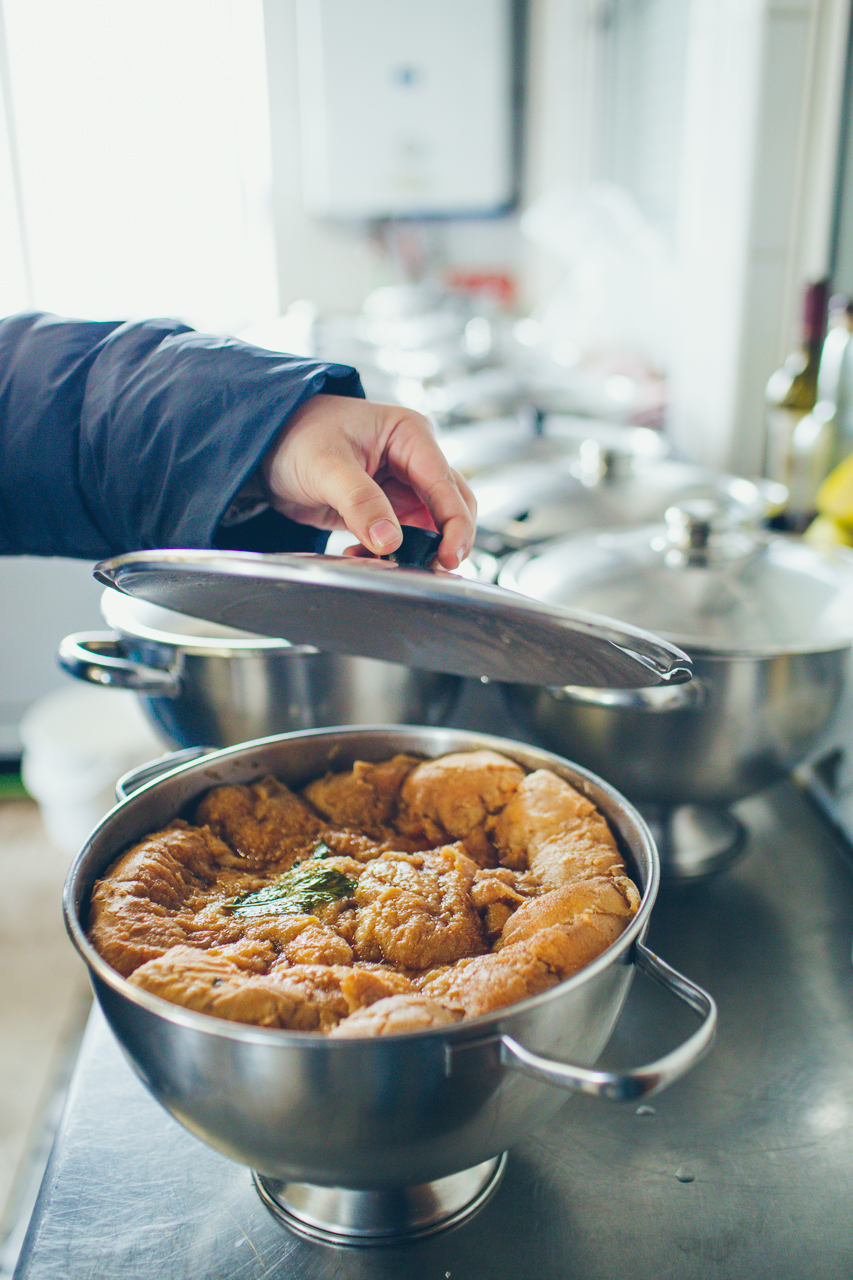 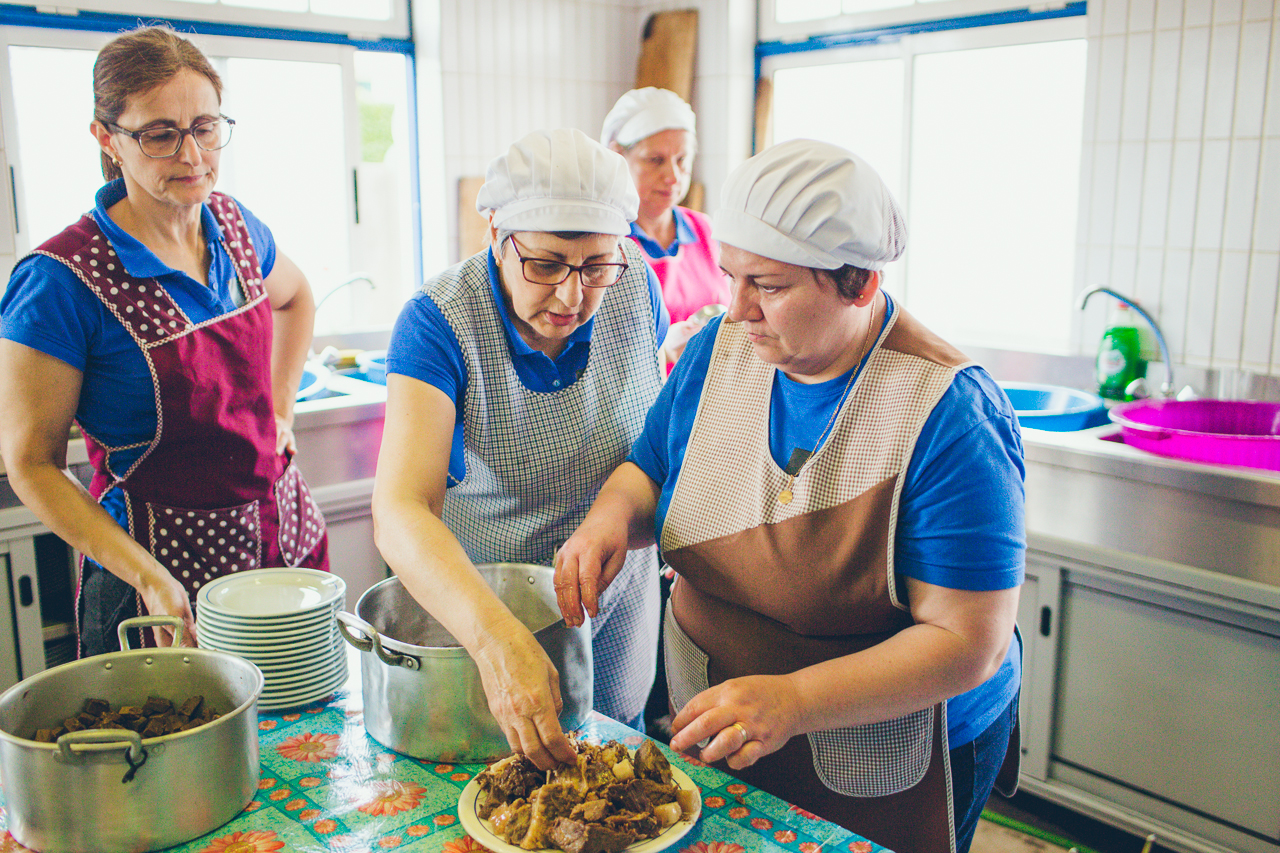 The lunch starts, everyone takes their seats by the long tables where wine is waiting for the thirsty celebrators. I am waiting for that amazing amount of food to be presented, a bit scared, honestly. The priest opens the lunch with some (probably) nice Portuguese words and the feast begins.
The soup comes first and it deserves to be the biggest celebrity, as the whole event is named after it. I have to admit though, in my country when we say soup, it’s nothing like this. In the soup of the holy spirit the liquid is as scarce as my faith in the crowned guy, on the other hand it is full of soft bread and with even more meat. As a side dish we get cooked cabbage and the roar of the river of my neighbours’ saliva. 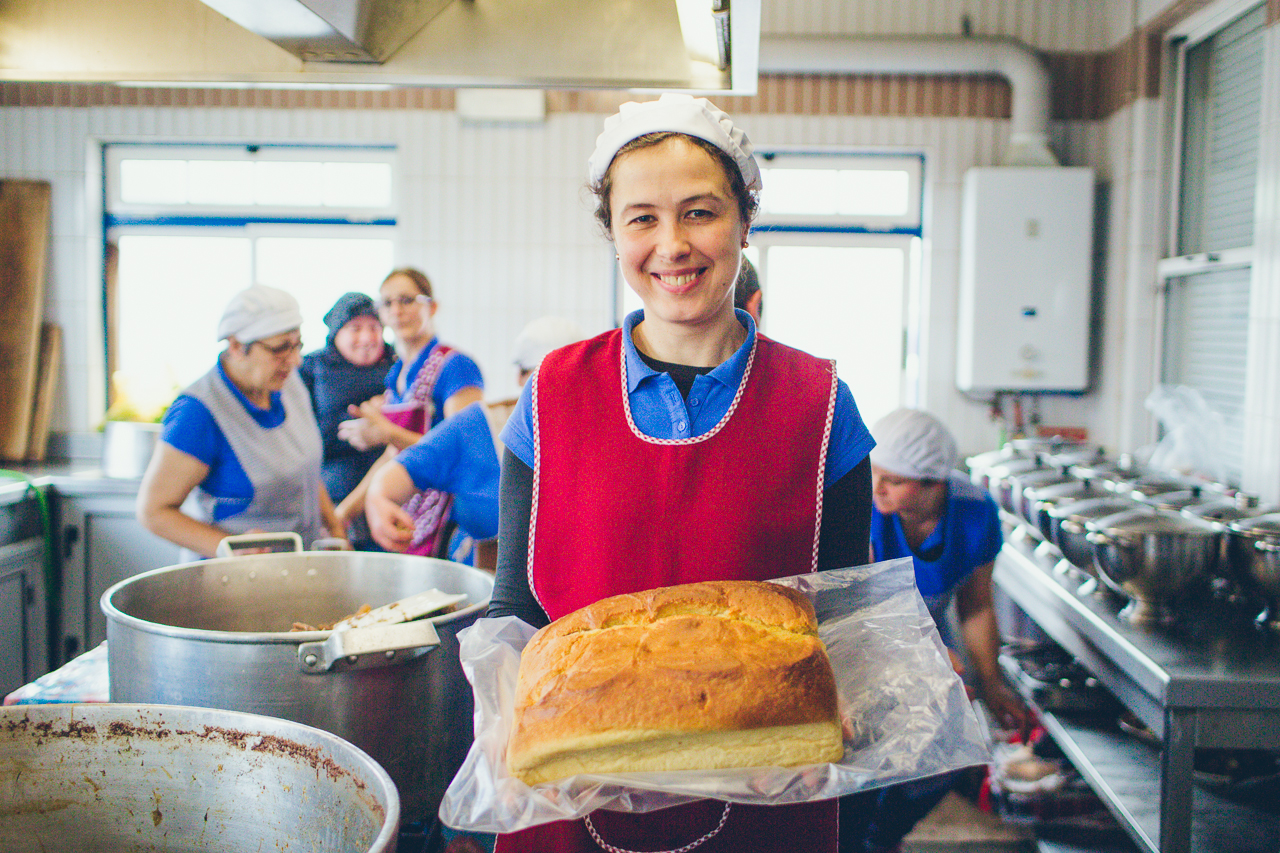 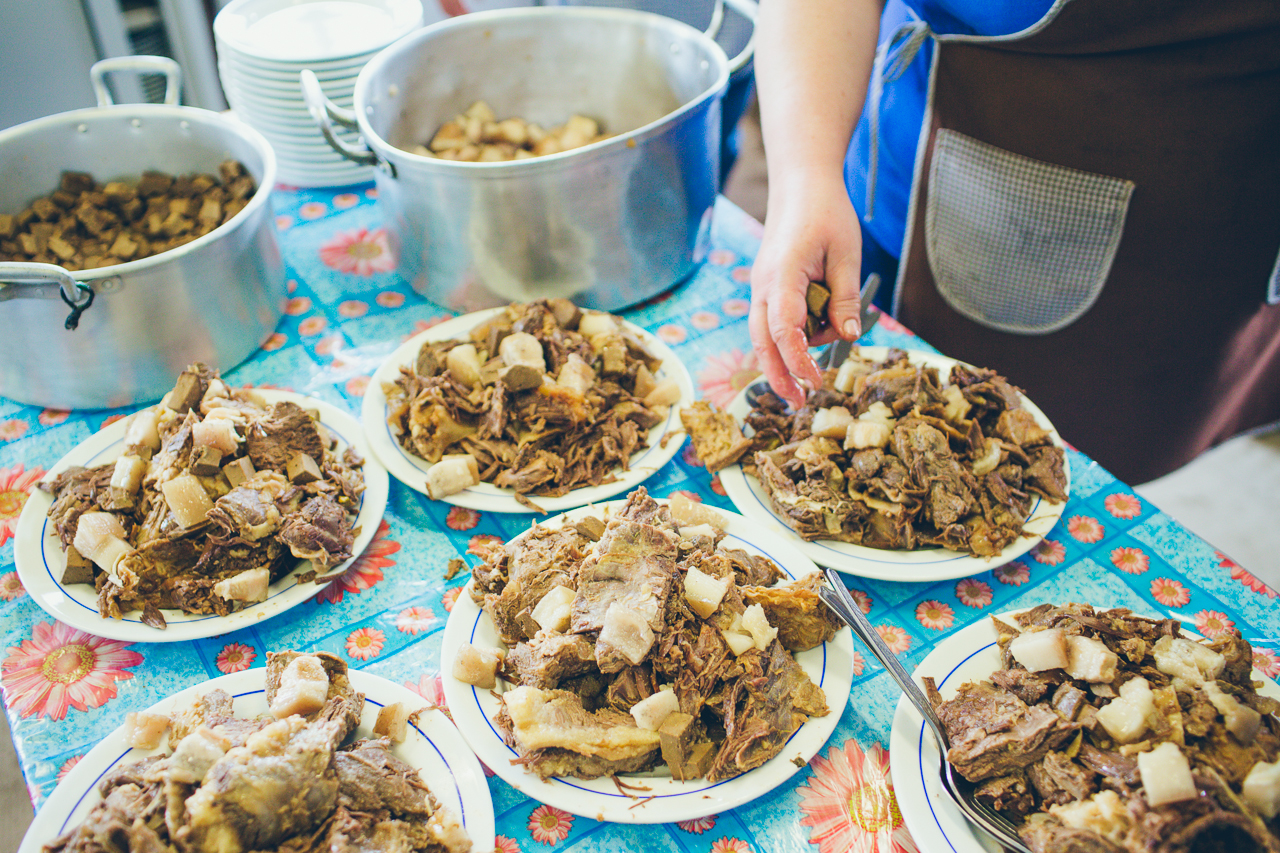 I believe that an entire mammoth can be fed by death with that amount of meat and bread when it turns out, it was only the first course of the meal. Next on stage is also some beef, but this one is aged in red wine for 24 hours and then roasted slowly in oven during the night. The taste is unique and fantastic. We also get some traditional sweet bread for the meat which is made partly of sweet potatoes in the villages, but not in Flamengos. As a good hedonist, I try to lay down on my seat as much and comfortably as possible after eating all this stuff, and in this very moment the final disaster hits me in the form of some sweet rice, topped with spicy cinnamon in pretty shape. I can’t help trying it and it’s delicious. Knocked. Out. 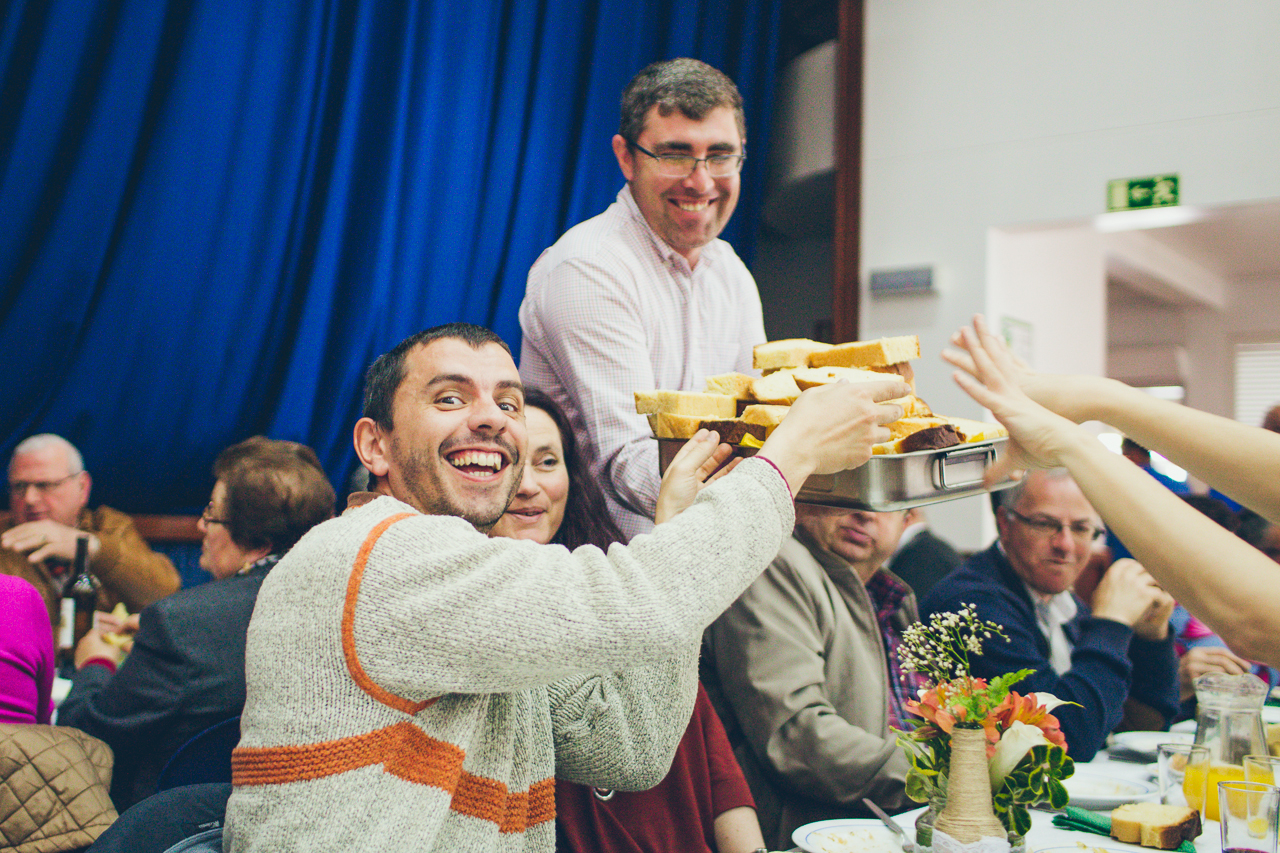 After the meal an elderly man who is sitting on the other side of the table offers us some booze tasting, this is how things are happening in the Azores, friendships are made very quickly. Just admit, probably you wouldn’t invite a complete stranger into your home for a drink. 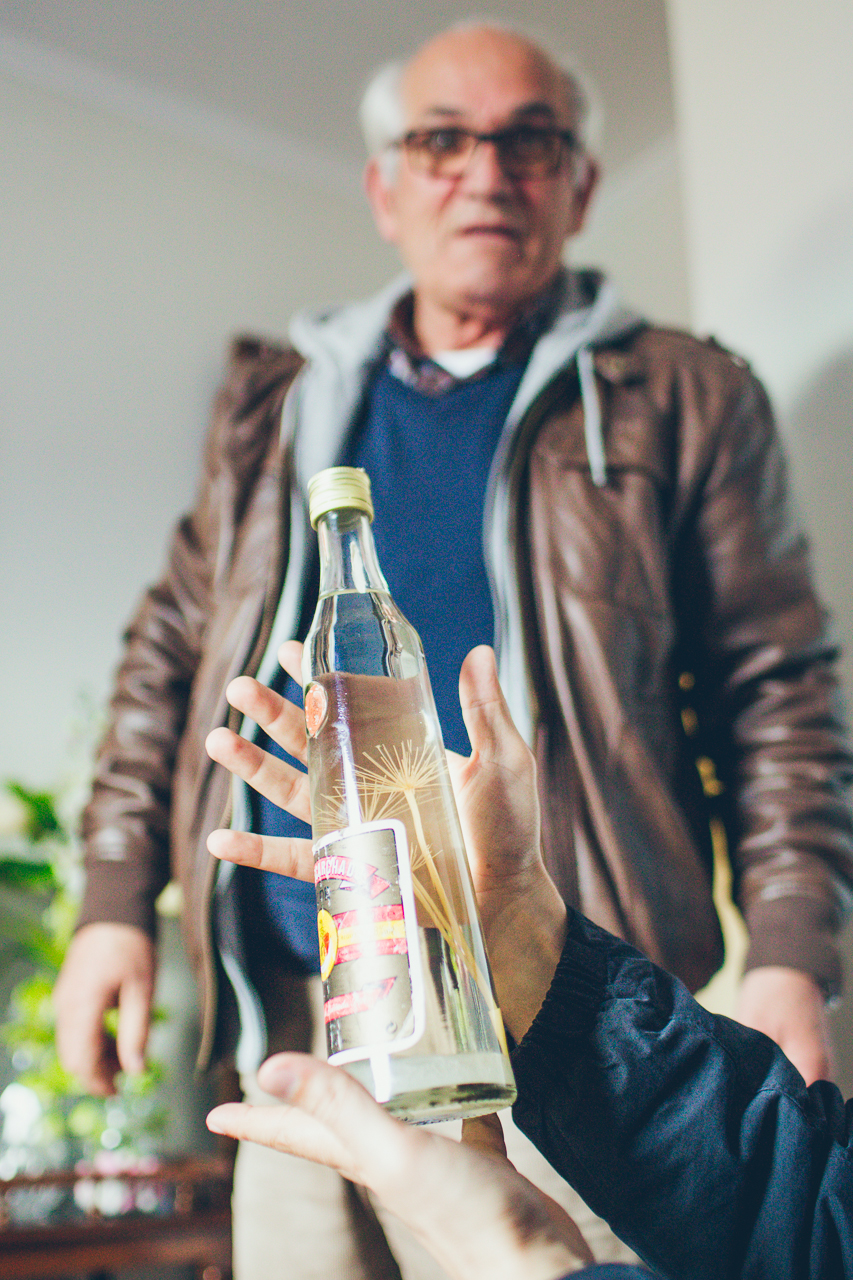 And as we already started drinking, we might as well go to Emanuel’s house where he offers some of his handmade liquors to taste. But this is still only a foreplay for the afternoon, which we continue on at Marla and Antonio’s home with a big range of whiskey selection, because they know well how much I love this drink. Among others there is a whiskey aged for more than 41 years, and I get the privilege to taste it as well. Mmm… We are laughing, having fun, I teach Hungarian folklore dances, sing along poems with a Hungarian band, Szabó Balázs Bandája and talking about the big question marks of life. Such as should we drink another one from the noble whisky or not. 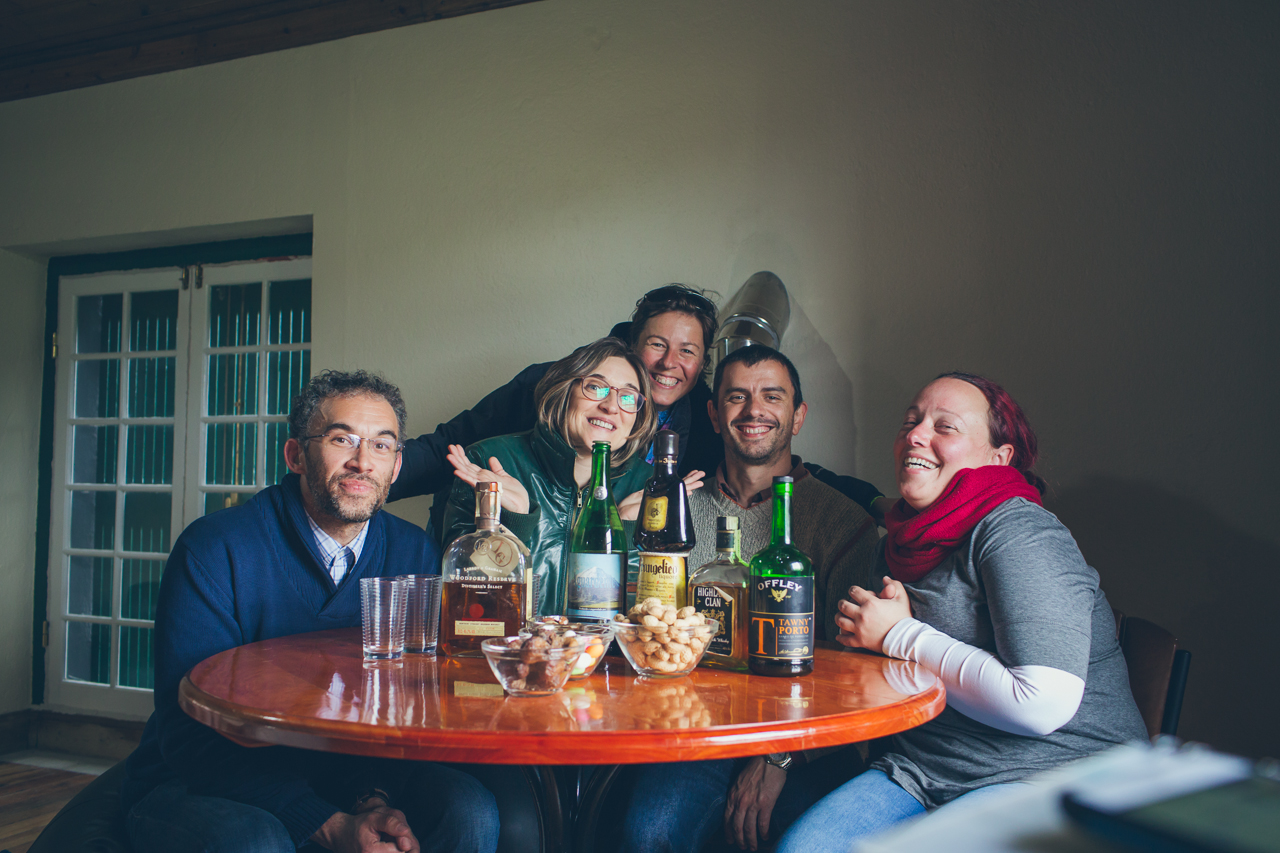 So this is the story of the holy spirit soup which gives us an unseen nice afternoon and evening, and I’d like to thank my friends for their nice invitations, their smiles, their great sense of humour, their booze and that they treated me as a friend and not only as a visitor. Sónia, Marla, Antonio, Emanuel, obrigadíssima! Lembro-me desta tarde por longo.