(Listen to music while reading blog post. Now big thanks for the recommendation to Piri Barják. Your destination is: Madeira island, what else?! Waiting for you!)

‘Beu, if you have the book with the title ‘How to move to a foreign country – for dummies’ on your shelf, please think of me, now I could really benefit from it.’
This is how it started.
Wait, not exactly. Some months ago after a not very successful journey on the Canary islands I returned to Hungary and decided to stuck somewhere after two years of being a lot on the road.
I was thinking in which country it could be and understood soon that it wouldn’t be in Hungary. But where then? I was chewing on this for days and sometimes it made me really crazy, but then I let it go and the answer immediately came to me: one day I woke up with the feeling that I should move to Portugal, to the island of Madeira. And this is exactly how it happened.

It wasn’t that easy though. Last december I visited the island for ten days, did couchsurfing, test photo shoots, made friends and tried to feel the place like never before.

Then back in Hungary in cold January I was fighting with the usual fears asking myself why on Earth do I need to move again, I’ve just got used to which side of the bed the nightstand is, and now I’m going to make a change again. Of course I have the same kind of fears before every journey: the fears of the unknown. No matter how well I know that it doesn’t make sense, every time I feel like rather staying in my well accustomed little stable world. The doubt started to creep in: what am I searching for in fact and where will I find it? I couldn’t find my inner balance and sometimes everything seemed pointless.

Paradoxically in the meantime a lot of people envied me, secretly or directly. Because for the most it looked like this: here is a tough woman who has the guts to move to a small island in the middle of the Atlantic without handcuffs and expectations. And that I have no fear of take a huge step towards my dreams, towards a dream that many dream of, but just a few make it come true. That I chase my freedom and desire. But actually I was whining under my couch fighting with my demons.

And in this fragile period my wannabe flat-mate wrote me she was not going to move to Madeira. At that moment I seriously considered cancelling the whole thing. If we are insecure, we tend to find signs in everything and if we really search for them, sooner or later we’ll find something that fits exactly our wishes. In my case it fit exactly my fear of the big change and gave me the excuse to say ‘F.ck it, I’m not gonna go anywhere.’

But I’m not that type so one day before the Big Move I was standing in the living room of my apartment watching the limited amount of stuff I lived with so far, trying to find out what should come with me and what should stay. This was the moment when I raised the question if anybody wrote a guide on how to move abroad. A book I just read and voilá, I’m packed.
It will be a brutal surprise: no recipe exists. So I won’t write one either. But I can still share an advice which a friend of mine gave me sarcastically. ‘Meli, to move to a foreign country you’ll only have one thing: a truckload of money.’
Finally in the spirit of minimalism I decided to put all the stuff I might need into a hold baggage, all my photo equipment to a hand luggage and grinned right into the face of the unknown future. 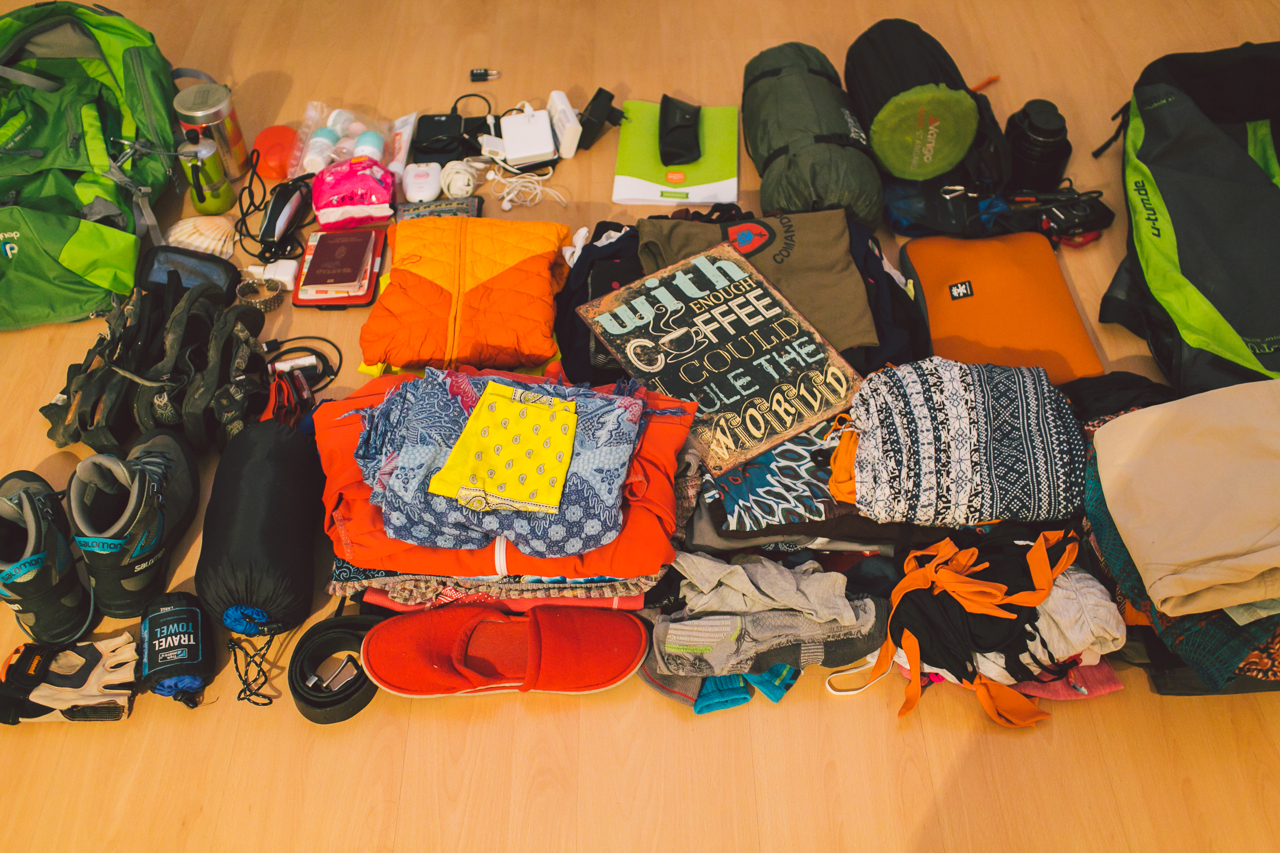 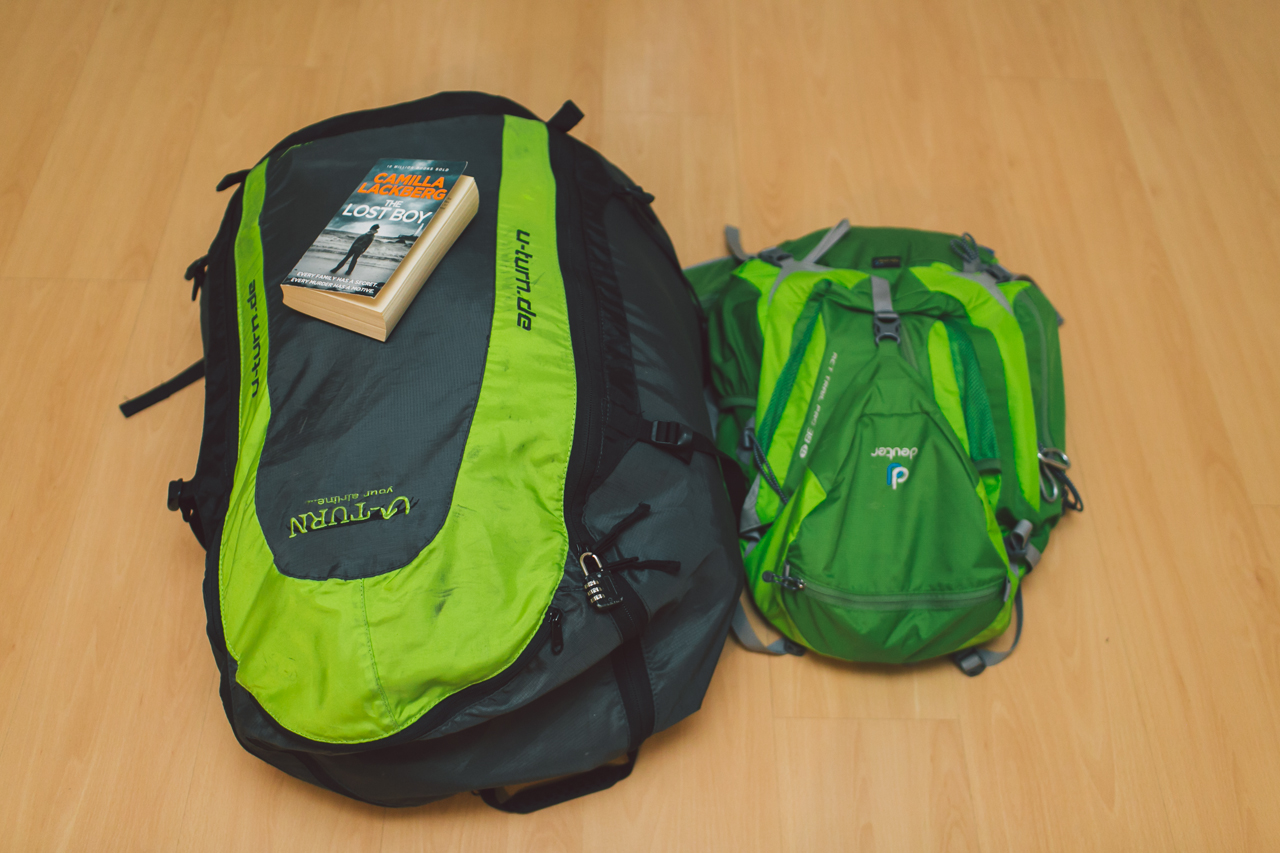 Here you can see what is the result of the selection. A bunch of clothes for cold, hot, sport, home, going out. Hiking boots, flip-flops. Personal stuff: a sign that was a present from my friend and my apple green little Bialetti espresso machine. Some notes, e-book reader, ID cards, money, some hygienic stuff along with a tent, a mattress and a sleeping bag, thinking of future nomad journeys.
At this point of the packing work we really benefited from Dad’s tasty sour cherry pálinka (it is a famous Hungarian spirit containing 50% of alcohol). Pálinka is happen to be an extremely competent consultant that helps you to decide extremely tough questions in an instance.

Later on, waiting for my plane on the airport I was thinking about leaving my parents, my friends, my former life, my well-known stuff as well as my well-known city for moving to an island where I don’t have the slightest idea what is waiting for me and what will happen to me. It didn’t take long for me to understand happily that this was exactly the reason why I wanted to come here.
And now I’m here, but even my arriving was not so simple and smooth. Landing on this island with a plane is not easy peasy, but this time a brutal side wind made the situation even tougher. The first attempt was not successful and the pilot told us if the second one won’t be either, we’re gonna fly back to Lisbon. The announcement was followed by some quiet whining and not so quiet screaming in the cabin.
But finally the pilot could manage to land and we were quite lucky because since then crazy wind has been blowing with 30-35 knots, raining for days and the arriving and departing planes were cancelled. No one in, no one out.

So no doubt, this new chapter of my life began dramatically. I feel a good mixture of hopes, doubts, curiosity, joy and longing while sitting by the happily dancing flames in the fireplace and watching the raindrops roll down on the window. At least I feel alive again!