(Listen to the music while reading blog post. Big thanks for this week’s music recommendation for Judit Neubauer. Your destination is: you don’t need to go anywhere, you’re just at the perfect place.)

Eating is one of the best things in life. Furthermore, it’s an excellent excuse for a meet-up with friends. Just think about it, when you meet your friends, there is a good chance that some nice dishes also attend the party. It doesn’t has to be a Michelin-star food, my friends know I can’t cook, so they appreciate if I don’t burn their toasts. Well, as I have the best friends on Earth, they actually eat my toasts even if they are burnt. Friendship might be all about this. Eating the the toast your friend has burned. 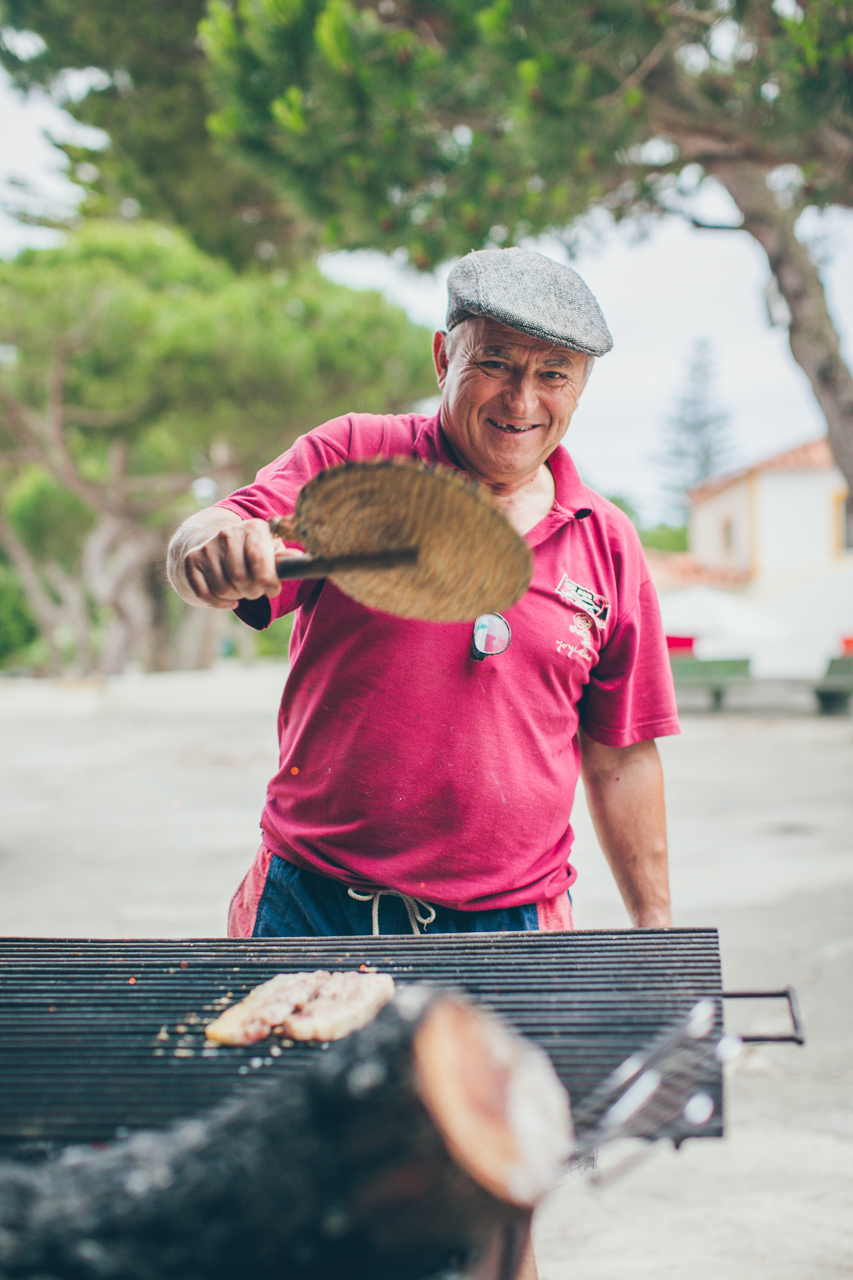 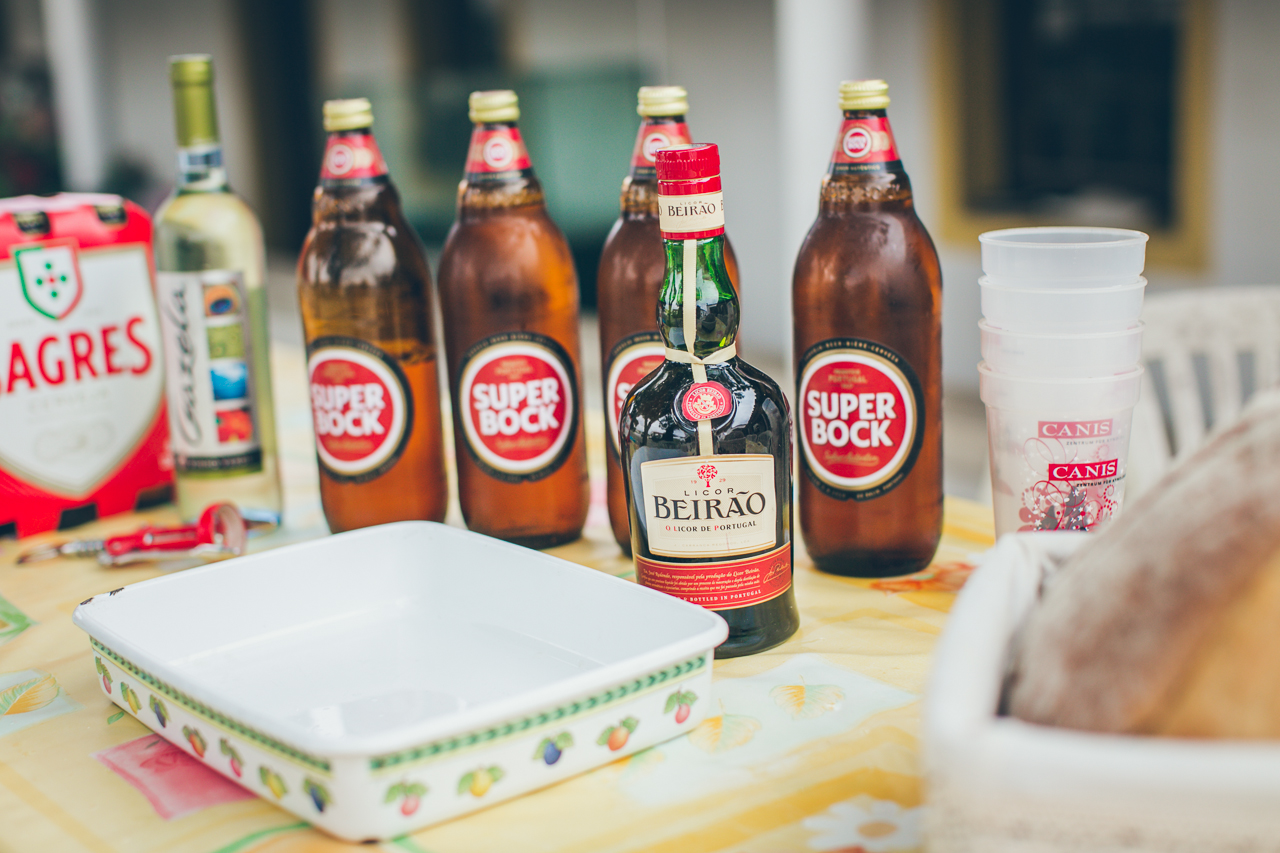 On my last Saturday in Sintra, I had the pleasure to share a quite bohemian and perfectly multicultural dinner. As for the nationalities we had Germans, Canadians, Spanish and Portuguese people and Hungarians amongst us. And it became crystal clear that these are only labels people use to find the path in the labyrinth of life. Because we were eating the grilled zucchini with our mouths equally full, and let the sauce of the mussels pour on our chin with the same enthusiasm. 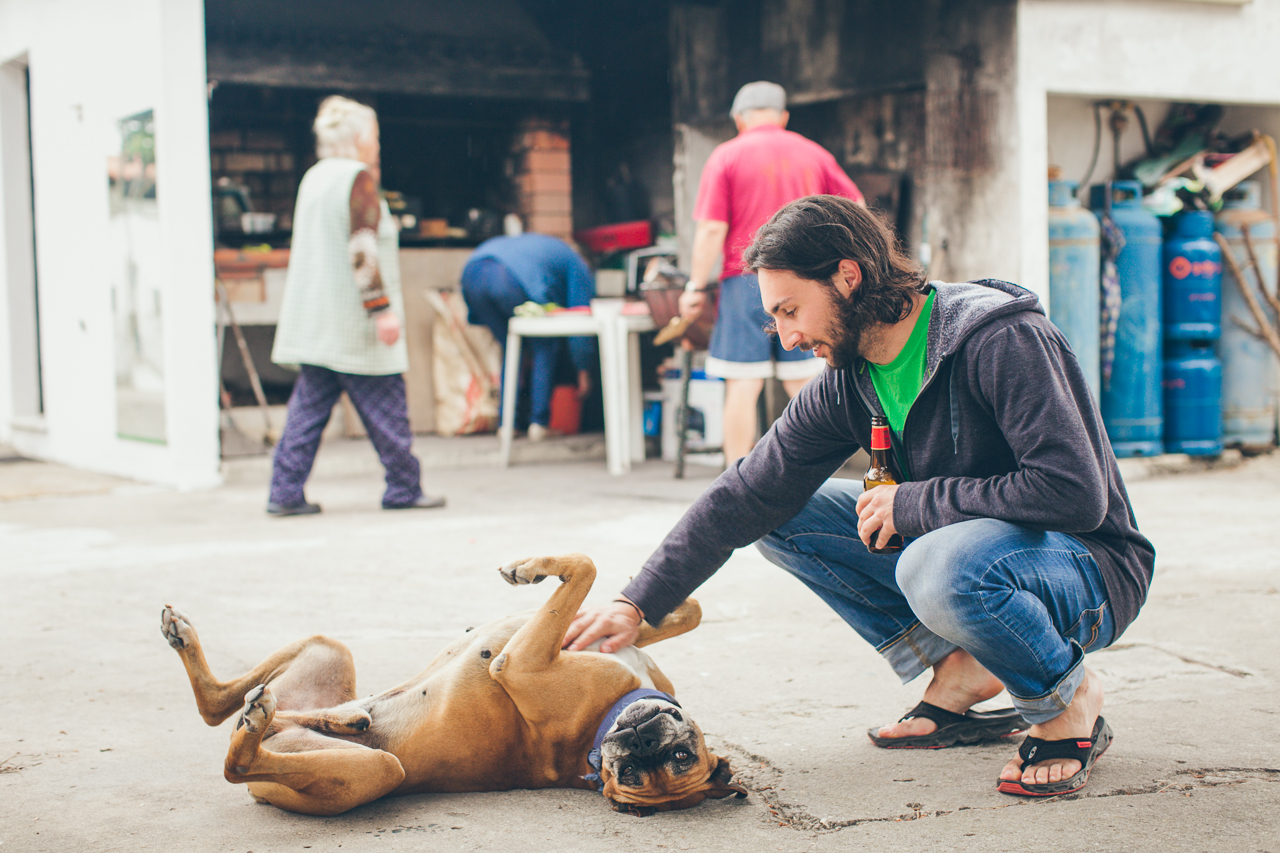 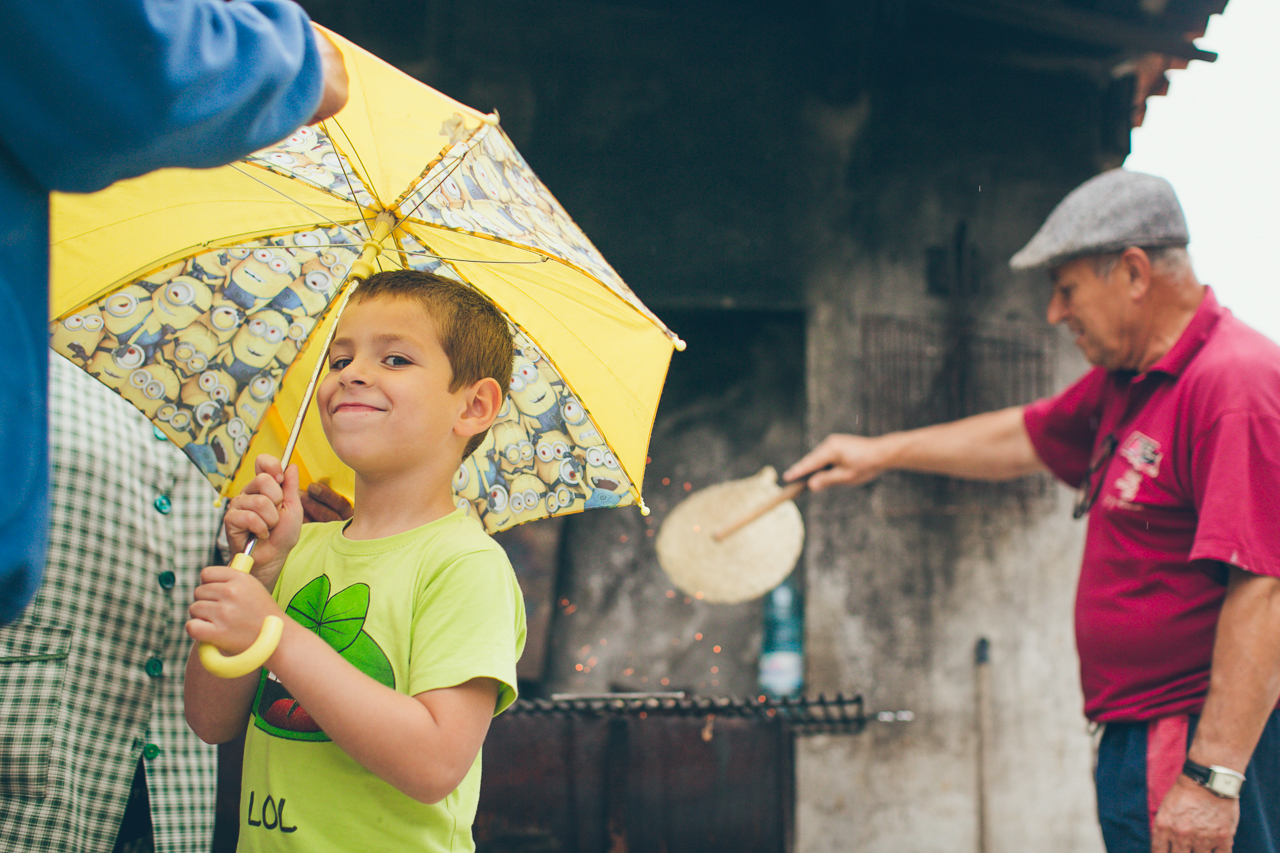 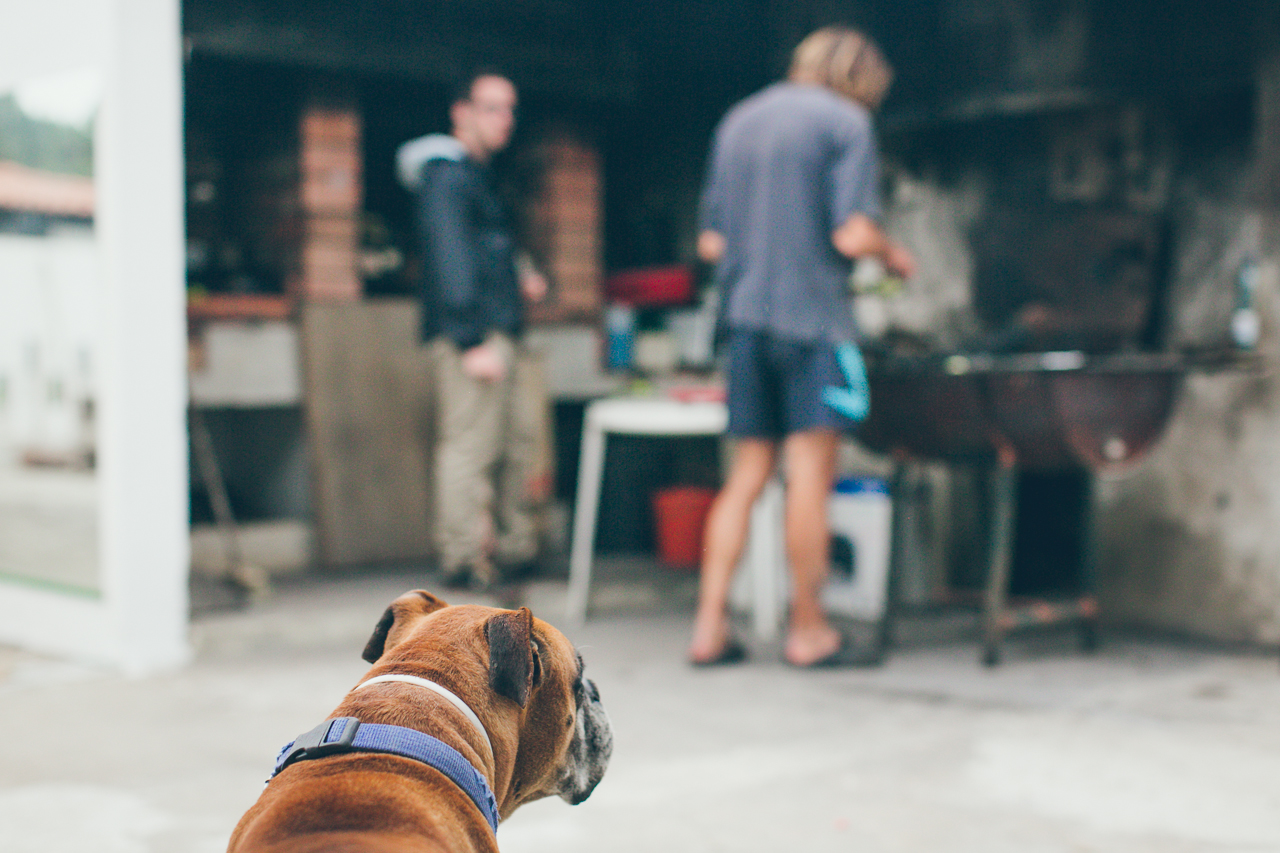 We planned to start the barbecue at 7pm and our host Tim asked our Portuguese neighbours whether we can use their fireplace. It was just natural that they agreed on it, but as the Portuguese hospitality is endless, they offered their courtyard for us as well, not to mention the full dining room in case it would be too cold or rainy outside.
But there are even more. At 7 Tim went to the neighbours’ place with a big bag of charcoal under his arm to start the fire, just to return back smiling a minute after realizing that the fire is already on and the embers becoming perfect for the barbecue. Yes, our neighbour had prepared everything for us. 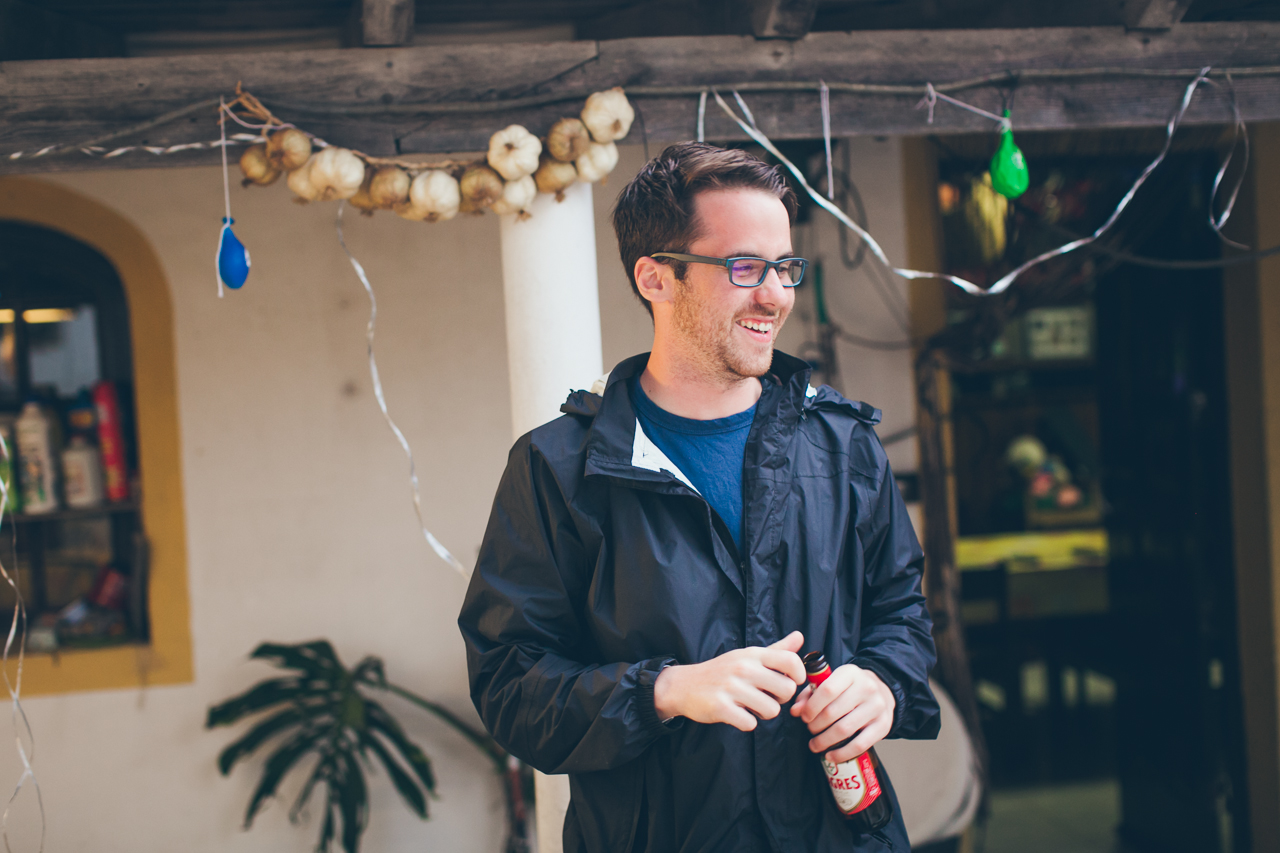 We slowly gathered by the fire and I was quite grateful for the widely spread opinion that barbecue is a man’s work, so I could stay away legally from cooking and could concentrate only on watching the guys create.
We were already smiling a lot by the time the dishes got ready and we sat by the table. The excellent smells made the neighbours join us for the dinner just to create a completely and perfectly messed up company.
As in the rural parts of Portugal people are generally not stressed out, we didn’t rush anywhere either, I would say we were eating for hours. Nuno arrived late but carried some delicious seafood with him, so we all forgave him soon. He just picked the stuff early in the morning fresh by the rocks of the nearby beach: mussels, octopus and some dragon claws. No, I haven’t mistyped. Dragon claws. 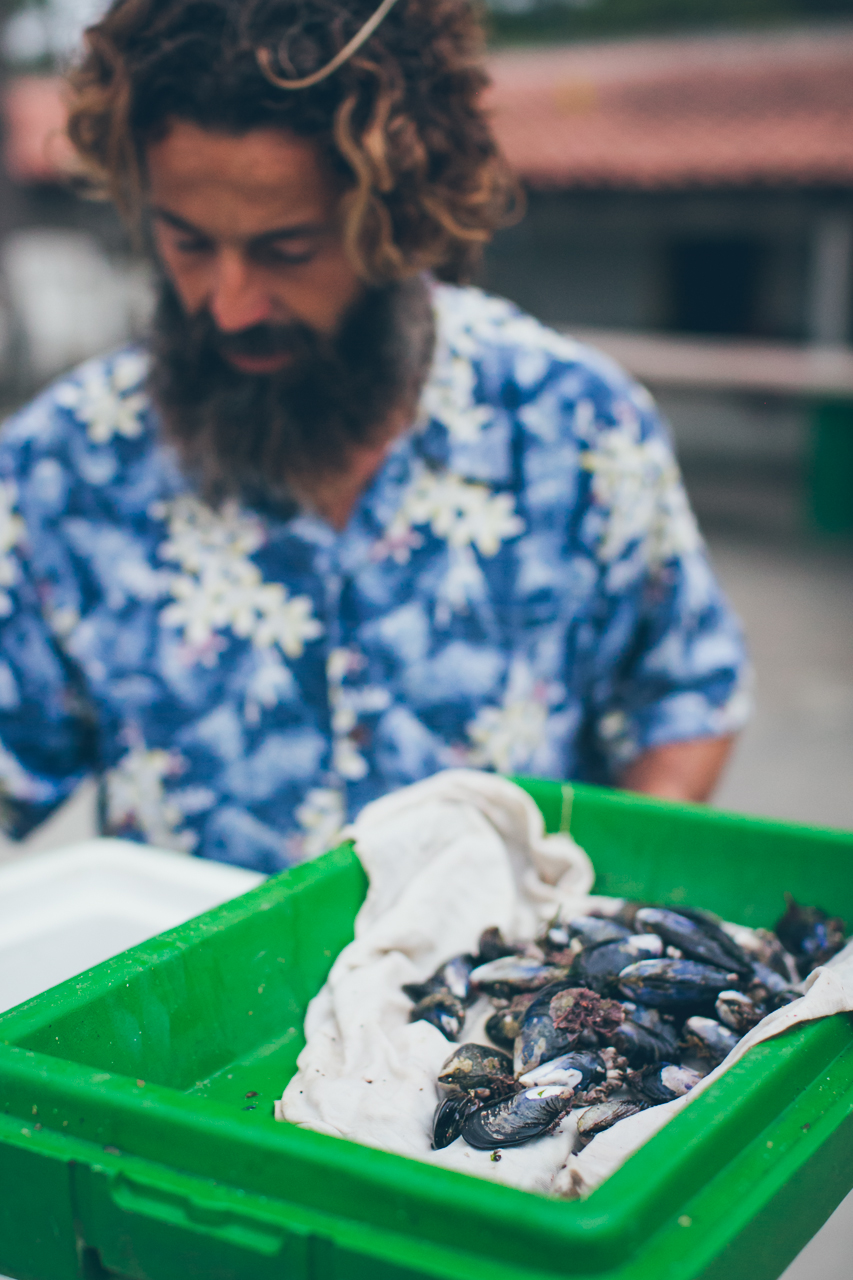 Well, this idiot-looking stuff is one of the best seafood I’ve ever eaten in my life. A couple of years ago, photographing a wedding in Gallicia I had a chance to have this thing on my plate, and at that time I was looking at it pretty unfriendly. I didn’t have any idea what I was looking at, actually. Not to mention how and which part should I eat. And this was not the only trauma that hit me as a beginner in eating seafood that night. First I had to eyeball a big crab who (I’d swear) was steering at me from the plate. I had to poke him to be sure he won’t be the one eating me. Then I had to undress him which was also challenging, but those eternal flavours were absolutely worth the effort.
The little odd-looking things appeared on my plate after this and I first had to think about that whether they are animals or plants. I remember I was quite unsure about it. 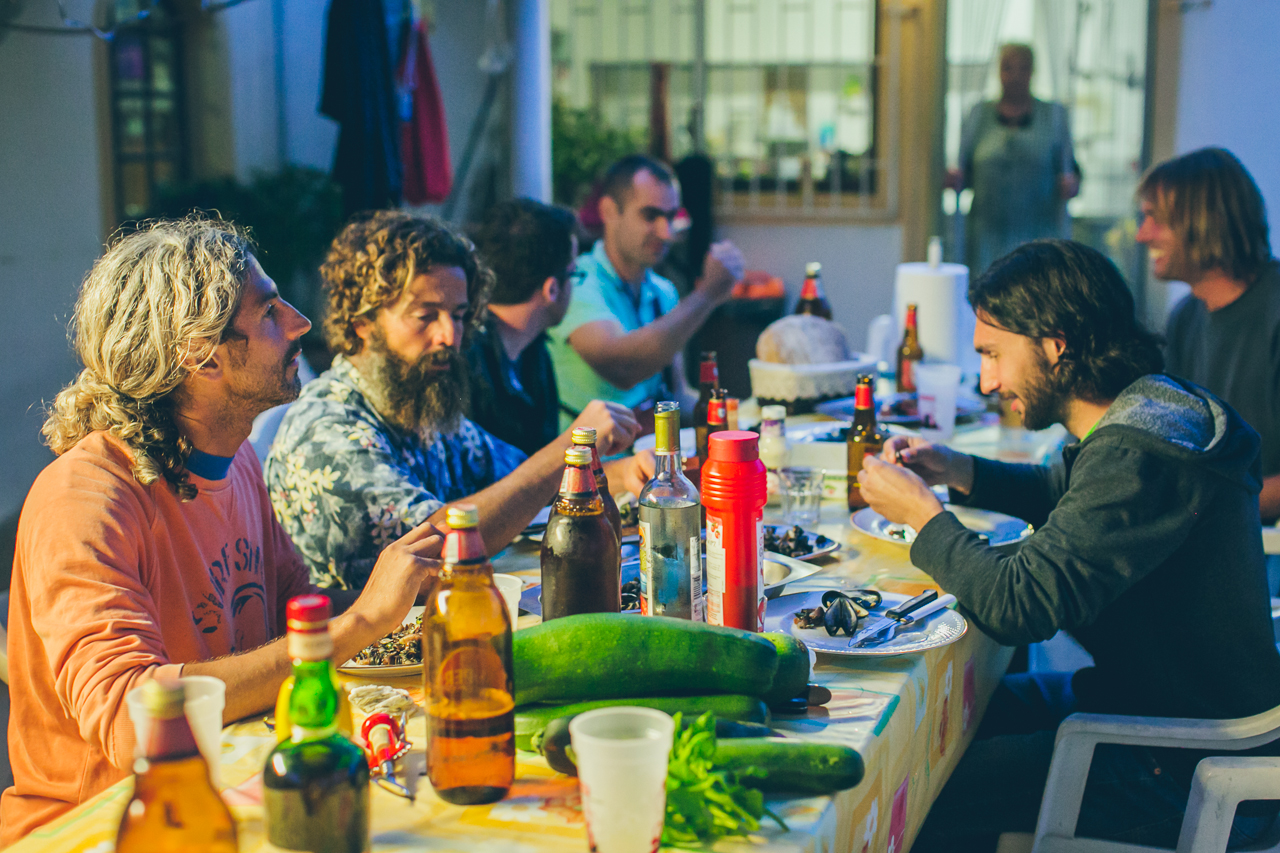 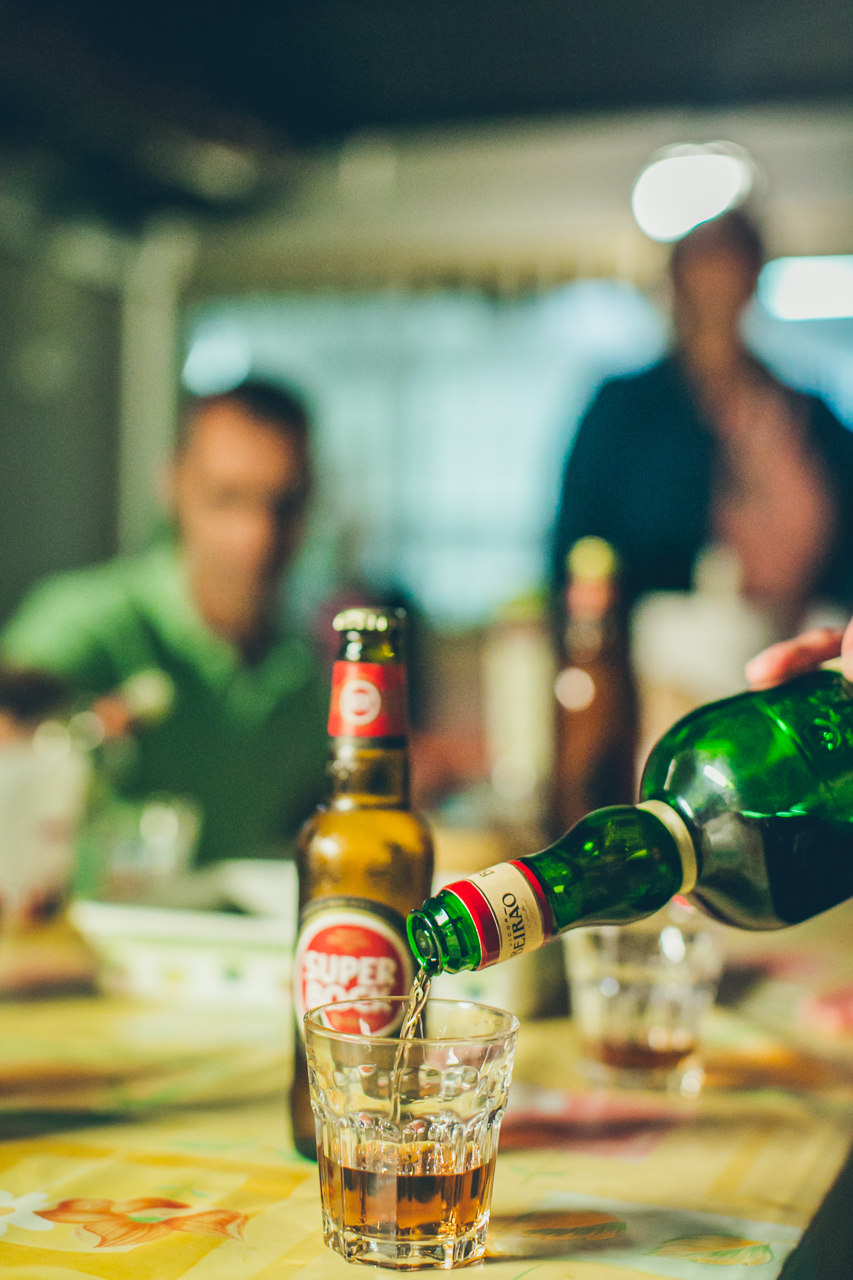 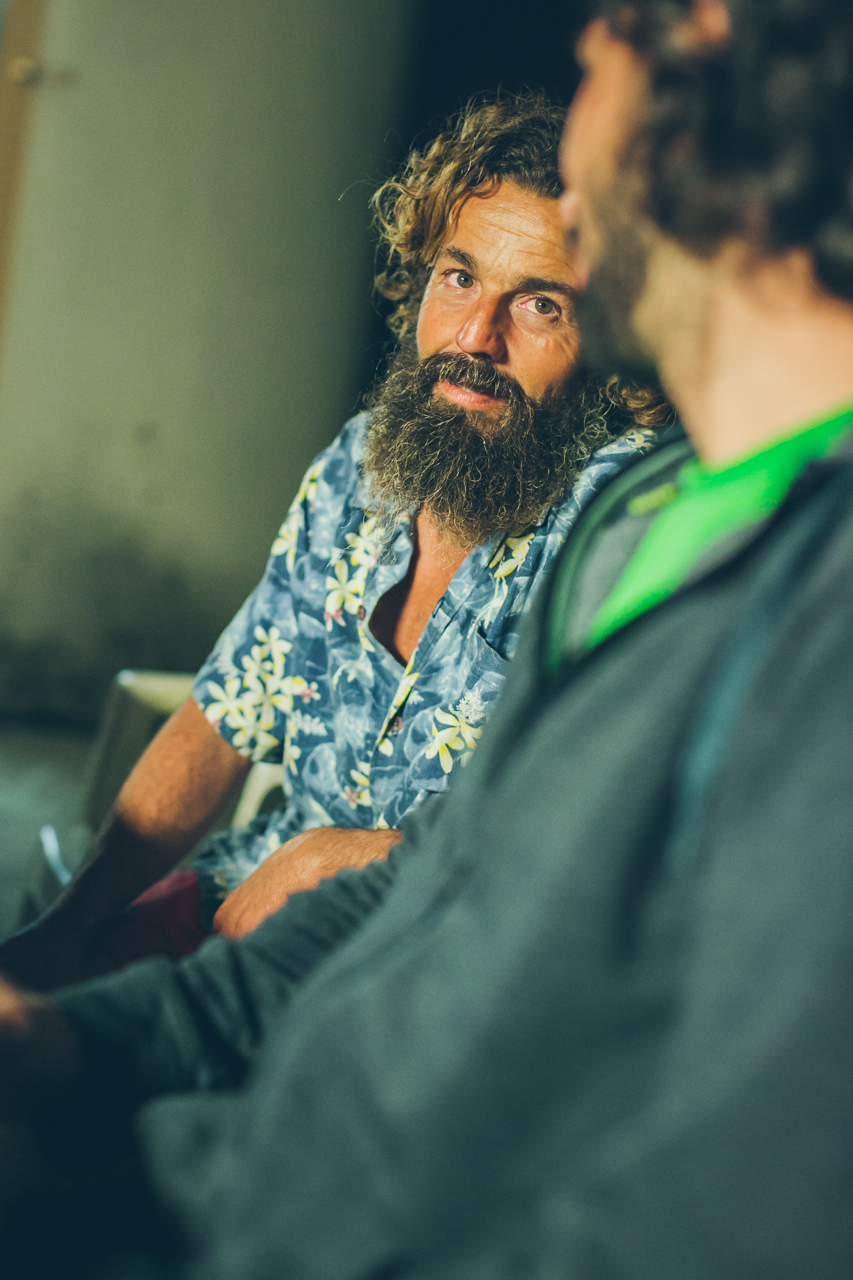 Fortunately having a former rendezvous with these little things, I could treat them with more confidence this time (I mean I was dancing happily for minutes that after 7 years missing them I can eat them again). But I forgot their names and I had to write it down to remember: percebes. It is said to be an expensive dish on the restaurants’ menu and this fact only made them more delicious that night. Not to mention how appealing was that we didn’t order it in a restaurant but our friend had picked them with his own hands.
How to make them ready to eat? Easy, it’s cooked in seawater, takes only a minute and when the percebes come up to the surface of the boiling water, it’s ready. We then heated them up on the grill and attacked them quickly 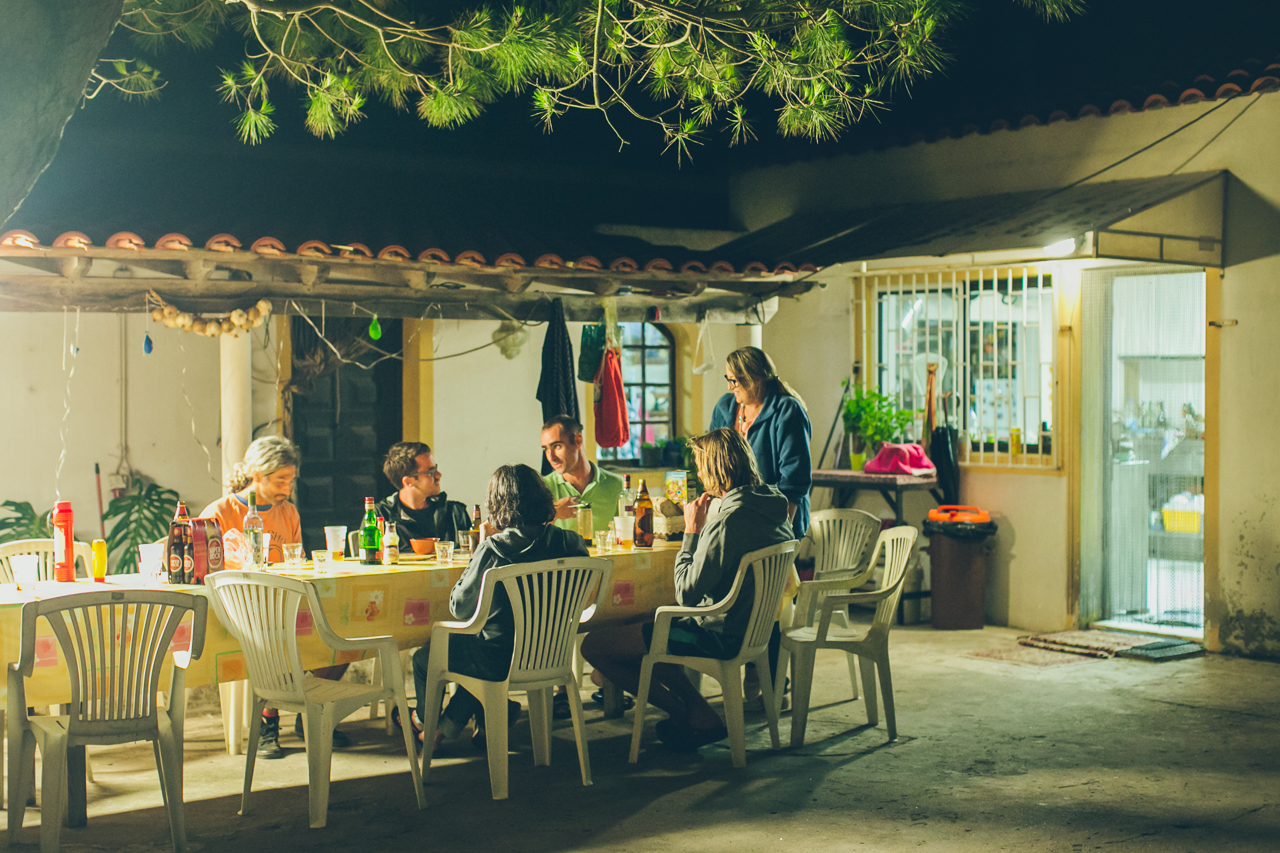 It felt good to practice again how to eat them. You can flaw the outer rubbery skin right under the claws and get rid of it. Inside you’ll find the soft little animal and you can easily sip it out and consume it very contentedly.
And the taste? Indescribable. Is it too cheap if I say you have to try it to get to know? But I would say, eating percebes is like tasting the essence of the ocean. No, I’m not high, however absurd it may sound, it’s like that. Tasting the essence of the ocean.